Re-arranging My Corner And Early Domesticity

Mary-Jane's sticky little finger are getting everywhere.  I have been thinking for a week or two to re-arrange my corner as she likes to open the bottom wooden draw and take things out of it.  And leave things of her in there, such as her books.  The final straw came today when she took out four of the small plastic boxes, had them on the sofa, and opened one which was full of buttons.  I didn't mind so much all the buttons being on the sofa and floor, it was the one in her mouth.  It was soon scooped out with minimal fuss.  I have no qualms about removing foreign objects from mouths or other parts of the body.  Working with for many years with women who seriously self harm has given me much experience in this field.

All the magazines from the top shelf are now in the attic.  The set of plastic boxes is now on the top shelf.  I have not yet finished arranging and re-arranging. 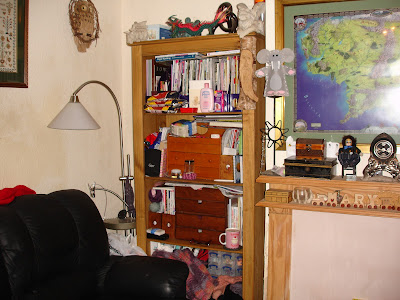 Here is Mary-Jane posing for the camera, with her new Dyson vacuum cleaner.  She likes to push it along.  Apparantly it does have a small amount of suction on it, so it it functional as well! 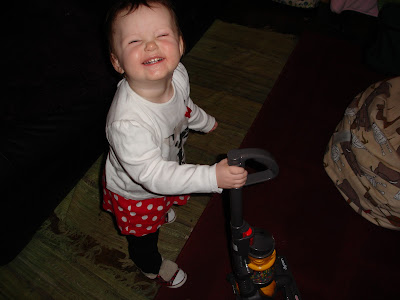 The coloured bits on the front, which would normally be where the dust and dirt is collected, also move if you press a different button.  MJ likes them to be moving around.

Here is the girl herself in action, doing a good job of hoovering the rug!  Start 'em young! 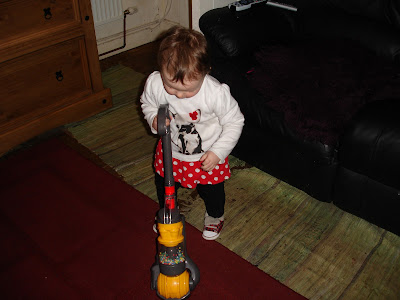