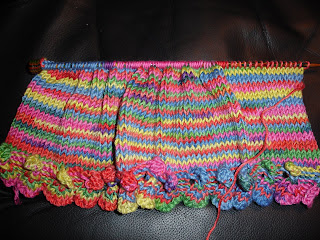 On Saturday we all (apart from HK) went to Penrith for the day. The weather was lovely, the last time I went was January, a week or two after we moved here. It's quite a nice town, touristy without being commercial
Penrith is blessed with a couple of yarn shops. In Penrith Crafts, I was treated to a ball of Rico Loopy. In Shades of Wool, Mary-Jane and I were treated to some Sirdar Snuggly Stripey Smiles, Sirdar Summer stripes and two balls of regia sock yarn. I'd been looking out for the stripey smiles since I saw it in a couple of magazines.
Despite all my best intentions, I didn't want to start anything new until I had at least finished my Thora Scarf. Temptation of new yarn did away with my best intentions. Last night I cast on the stripey smiles. I'm doing a cap sleeved cardi for Mary-Jane. The pattern is a sirdar one, number 1915. The image shows the back piece. I'm about two inches or so off doing the arm hole shaping. Just prior to this shaping is a row of decreases, I think one in very fove or six stitches, so that will pull it in and give it plenty of swing and movement. The bottom border has decreases as well to give it the eding, plus the bobbles of course. Multi-coloured Mary-Jane. The cardi is going to look fab and hopefully shouldn't take too long to do. Then give me a massive nudge to finish a project or two at least, before I cast anything else on.
Posted by CarpeDyem at 22:07 4 comments:

A Trio of Cupcakes 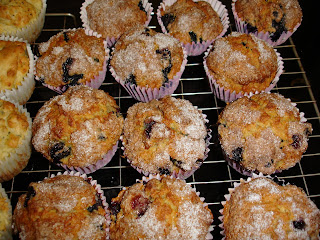 As you know, after a sojourn, my baking mojo has returned, I'm very happy to say. I spent yesterday afternoon in the kitchen with my Yummy Mummy pinny round my middle. I was baking for a Meeting today.
I was pleased with the results, but will tweak some of the recipes for next time. These are my low fat Blueberry Muffins. That low fat that they are covered (literally) in sugar. Oh, all the recipes are from books, so I can't put them on here, but if you do want them, I can let you 'borrow' them. 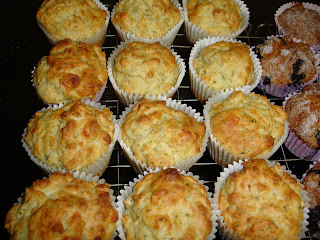 These little beauties are the first savoury muffins I have ever made. They are Herb and Smoked Cheese Muffins. They would be nice cut in half with some lovely real butter, perhaps a slice of cheese, or maybe even ham. Mum thinks they may be good with soup, they may well be. 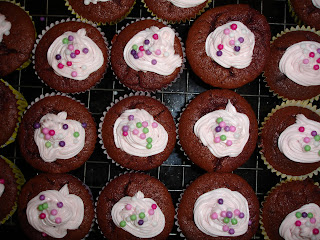 My second attempt at Red Velvet Cupcakes - and my second attempt at using an icing bag, come to think of it! I discovered why my first batch were not as red as what I thought they would be, and beleive it or not, I must have been having a very blonde moment and didn't add enough red food colour. These things happen to the best of us......
This post is dedicated to my good friend Sylvia. I wish we could knit, drink tea (okay I'd get you a coffee) and eat cakes together again soon! And you too, Sally!
Posted by CarpeDyem at 21:05 2 comments:

Mary-Jane and the chair 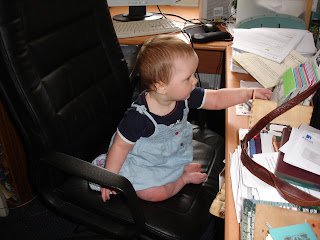 Mary-Jane is getting quite grown up, both physically and mentally. She has been able to sit up un-aided for some months. She likes sitting in 'proper' chairs, especially at the table. She loves being involved in the happenings in the kitchen and joins in with the chatter.
Here she is sat in HK's trusty computer chair in Grandma's office. She looks like she might be contemplating doing some filing! 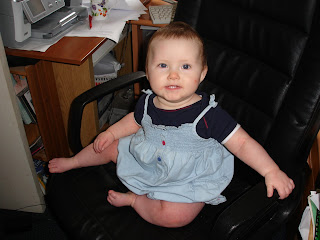 And here is the little lady herself, holding onto the chair arm. She is now able to pull herself up to standing position. Her crawling is coming along a treat. She can crawl a few steps now. Today, we stood her up by our living room door to measure her height. It is somewhere that her 12 year old cousin has his height measured, ever since Mum & Dad moved into the house. So at the grand old age of ten and a half months, Mary-Jane is 29.5 inches - half an inch off two and a half feet!! It doesn't seem believable. Another two inches and she will be half my height!
Posted by CarpeDyem at 20:53 2 comments:

Labels: Mary-Jane and the chair 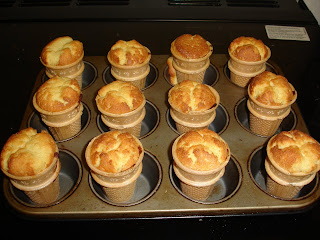 My WI Life Magazine arrived in the post day before yesterday. In it, was a recipe for Ice Cream Cone Cupcakes. The recipe was taken from their newest cake cookbook. I had to make them.
Basically the sponge is your basic sponge. The alternative sponges could be huge. So once you've made your batter, you put it in the cone and into the oven for around 20 mins. The cones are the ones that are flat on the bottom, and are just placed in the muffin tin. 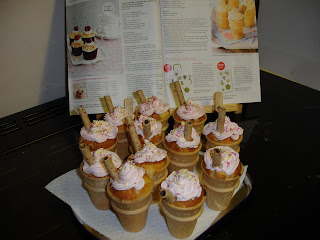 Then once they are cooked and cooled, it's time to get the icing bag out. I've not used an icing bag before, well I may have been allowed a go when I was knee high to a grasshopper, but that doesn't really count. The icing bag was easier than what I thought it would be. I shall be practicing with the bag a lot more. I've been put off some cake recipes due to using a bag. Not anymore!
The cakes are finished off with a rolled crispy thing. I wouldn't recommed the crispy thing unless the cakes are to be eaten on the day. The
recipe uses flakes, perhaps a similar chocolate can 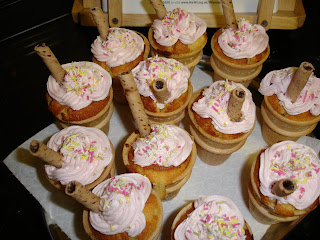 be used. The crispy things don't stay crispy come the next day.
Here is a close up of the novelty cakes. Highly recommended!
Posted by CarpeDyem at 14:37 No comments:

Sunday Morning in the Garden

I've been waiting for a nice sunny morning to spend some time out in the garden. There is only really one shaded spot in the garden, not counting the front. It's dappled shade is beautiful. We took a blanket out, with some of Mary-Jane's toys and Rhinog.
The green thing in the background is the old oil tank. HK and Mary-Jane are enjoying being in the shade. Rhinog was a bit restless and trying not to settle too close to MJ. 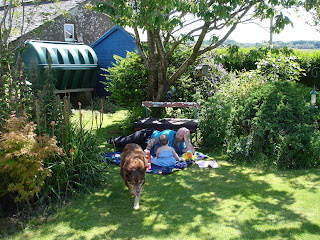 The dog himself, Rhinog, lapping it all up. 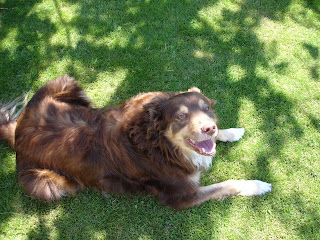 MJ and Daddy playing and looking round. 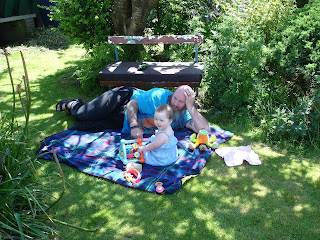 MJ with her new octopus that she had the day before from the church fair. 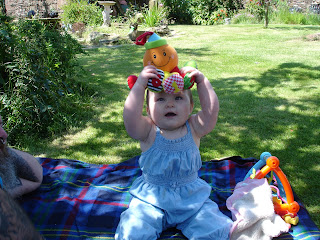 It was nice and relaxing sitting here. Mary-Jane loves being out in the garden. When we head towards the back door and she knows we are going into the garden, she squeals and squeals.
Posted by CarpeDyem at 14:19 No comments:

Labels: Sunday Morning in the Garden

Mary-Jane, Mum & I went to Calder Bridge Church Fair on Saturday. It's the same church that I took photos of, for the walk. Mary-Jane and I walked to Calder Bridge as it was a gloriously sunny day. I didn't realise how hot it was till just after we started off, so when we got there I was glad of a sit down. The fair was held in the Village Hall. We got there for two and it was officially opened at 2.30. You could look round the stalls before the official opening, but you can't buy anything, although you can have things put to one side. I didn't know this until after I had thrusted a pound coin into a poor girl who was stood behind a stall. Oooops.
Part of the fair is an Afternoon Tea, which we naturally had. I was full after - open egg sandwiches, gooseberry pie, scone and rum butter, a small slice of fruit cake and at least one other slice off cake. Not surprising I was full! And we bought a chocolate fudge cake to bring home, as well as a jar of apple chutney and a jar of lemon cheese.
I was introduced to a few people. I got talking to a lady on the handicraft stall. There was knitted things on the stall, need I say more. Mum knew the lady already. The upshot of the conversation was that I was invited to her Knitting Group next Monday. It's held at Santon Bridge, in a cafe. It's a normal knit and natter, no pressure to make things to sell. Sarah, the lady, did warn me that she would be haranguing me with the Gosforth Show Handicraft & Produce Class Listings. I said I'd already had one and was thinking about doing something. She was delighted. I'm looking forward to next Monday. It clashes with the other Monday group, so I shall give it a go and see which I prefer. The new one meets 2nd & 4th Monday at the moment.
I bought a purple knitted dinosaur. It really caught my eye from across the hall. I wasn't sure if I was buying it for me or Mary-Jane. Mary-Jane enjoys playing with it and I enjoy watching her play with it. Mum bought a wall tidy for MJ's room. We were lucky on the raffle as well. MJ won a bottle of Whiskey for Daddy. You could choose the raffle ticket numbers, so I chose 22 as it is MJ's Birthday, and that was the winning ticket. We also won a pair of purple table lamps and Mum won a M&S Lavender bath set.
Mary-Jane seemed to like the fair. She was looking round everywhere, at everyone. A young girl of about 5 was playing with her and she was squealing with delight. She sat at the table, in a proper chair, to have her food and looked as though she felt quite grown up.
Posted by CarpeDyem at 21:53 2 comments:

I have been to a Fund Raising Event for Friends of Chernobyl's Children. It was held at Cleator Moor Civic Centre. It was an enjoyable evening. The entertaining was done by Geoff Dickens, a singer and guitar player. There was also a raffle of no less than 70 prizes, a tombola, stand up bingo and a Pie & Pea Supper. Oh as well as an auction for two signed rugby shirts, one of Whitehaven and the other was Leeds Rhinos. Monies raised on the evening came to around £2250.
The event was attended by some of Chernobyl's Children. Friends of Chernobyls' Childrens Charter states " To relieve the suffering affected by the radiation explosion from the nuclear plant at Chernobyl".
The following information is what I have taken from their charter leaflet:-
Provide family placements for children/orphans from the Mogilev region for at least one month each year and to meet the full costs of these visits, which include optical, dental and health checks as well as lots of tender loving care by extensive fund raising the FOCC can meet the full costs of all the visits without additional contribution from the host families.
On 26th April 1986, the No 4 reactor at Chernobyl nuclear power station in the northern Ukraine overheated, exploded then went into meltdown. The worlds worst nuclear accident released 190 tons of highly radioactive waste material into the atmosphere, exposing the people of Chernobyl to radioactivity 90 times greater than that of The Horishima Atomic Bomb. Of the radiation that was released over 70% fell onto the population of Belarus, resulting in 800,000 children in Belarus and 380,000 in the Ukraine being at a high risk of contracting cancer and leukaemia. It will be another 24,000 years before the land is safe and the children no longer suffer.
Since then, the charity, FOCC, has helped over 1,000 children, who are at risk, bring children form Belarus to United Kingdom, for a months holiday every year. The charity targets children from orphanages or disadvantaged homes, aged between six and thirteen. These children are in great need and come from social situations that make it difficult for them to get the care they require at home.
Very sobering thoughts. But some positive ones.
Posted by CarpeDyem at 23:43 No comments: