The Next Bag, which I might call 'The Baggy Trap Bag', is on the needles. I started it yesterday at Knit Chicks. That evening I decided the base was too long, so that got frogged and I've re-adjusted it. I'm now ready to start the 9th Round. The name will be explained next blog, it's all to do with the colourway and shape.
Posted by CarpeDyem at 13:23 No comments:

I can throw pans and tantrums better than you can!

Well it's been a few days now. And there have been a few very turbulent moments, to say the least!

Things came to a head Saturday Evening. It wasn't just a case of the fur flying, pans were as well. I got out-tantrumed, by a very contrary HobbitKeeper. Lots of stress was vented and emotions were in the open. I sulked for a few days after, which is my way of coping with anger, being quiet, withdrawn and working things out in my mind.

But we're resolved and stronger for it, knowing each other better. The house is a little cleaner - smells more of bleach...... Knitting in front of the TV shall continue........... ;-)
Posted by CarpeDyem at 13:10 No comments:

The Devil Went Down to Georgia

I've finally gone and done it. The agonising is over. The final decision is cast. The Risk has been taken. I'm a free range Nurse, waiting for my CRB to come through and work for the Agency. Let's hope they do have plenty of work. Fingers crossed this huge gamble will pay off.


If you are familiar with the song - 'The devil went down to Georgia', well I'm Johnny.


It's not quite hit me yet.


Confidence and the courage of my convictions are needed in abundance


But I have my husbands blessing and support, which means more than anything.
Posted by CarpeDyem at 14:35 No comments: 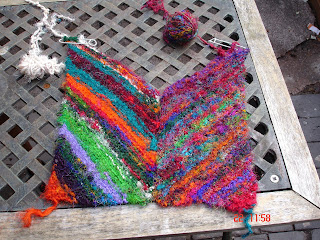 My next project is a recycled sari silk bag. I started it yesterday and have got cracking with it. It does seem to grow quickly, but then again I've spent a couple of hours doing it. Am hoping to get out in the garden and do a couple of hours before I pick up HobbitKeeper, then if it's still nice out after I'll be back out there!

Each piece has been made from a seperate skein and look quite different. I like them both but I'm not sure if they are too different to work together. Bottom line is that they will still be used for the same bag hahaha! The colours are absolutely fantastic! I'd definitley recommend this type of yarn.

Posted by CarpeDyem at 12:50 No comments: 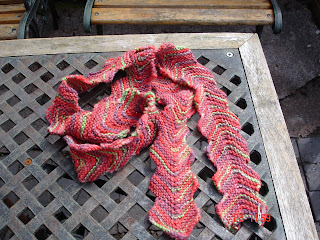 Have finshed the scarf. I finished it yesterday at Knit Chicks. I got to the point that I didn't think it would end - seemed to go on for ever!
The Pattern
Yarn - DK/Aran
Needles - 5mm
100g - 142 yards
Colour - Hand Dyed by Me!
Cast On 24 Stitches
Row 1 - k10, k2tog, place marker, k2tog, k10
Row 2 - all even rows - knit
Continue as above until there are 6 stitches either side of the marker, on the Return Row (Row 12), cast on 6 stitches then knit to end. Next Row (Row 1) - Cast on 6 stitches, work as Row 1.
The Scarf can be as long as short as you want. The squares can be bigger - or even smaller - as desired. The key is to always cast on an even amount of stitches.
It's good for TV Knitting, or when you want to do nearly mindless knitting with a small amount of concentration, with the added bonus of Instant Gratifacation - well after a couple of hours!! Enjoy!!
Posted by CarpeDyem at 12:33 No comments:

After a lot of soul searching, I have rang work and said I was going to come back. Great they said. You're on nights and are not going to be moved. Back in the same place. I don't want to be there. Would I rather financial instability than going back? I really don't want to work there. Nothing has changed.

I feel as though I've sold my soul to the devil and Mephisto is warming up to Waltz with me.
Posted by CarpeDyem at 12:27 1 comment: 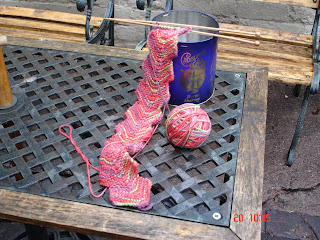 I started the Skinny scarf as sort of planned last night. I made the pattern up. It's a very simple one and I don't labour under the delusion that I am the first to do such a scarf! I took myself into the front room and put the Idiot Box on. After watching Ghost Whisperer, Most Haunted and The Wyvern Mystery, this is what I ended up with.
I'm quite pleased with it so far, hopefully get it finished by the end of Knit Chicks tomorrow.
I'll post the finished item and pattern when it's all done.
I need to spend more time working out how this site works cos it's driving me fecking nuts working out how to place the images where I want them to be. One image is fine, the second just wants to sit next to the first. Getting attitude from such things on a Sunday is Not Good.
Am awaiting HobbitKeeper to come home.
Posted by CarpeDyem at 12:06 No comments: 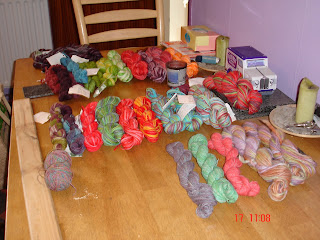 Another up and down day.

I've taken some better pictures of some of the yarn for the store. I've photo'd and tagged all this lot (as opposed to bagged and tagged....) plus probably half as much again and am now about half way through sorting it all. And only two skeins on my store shelves hahaha!
I've found a pattern today for a skinny scarf that I'm itching to cast on. Dilemma as to which yarn to use, but have got it narrowed down to oooh about four or six. Have also come across a pouch/phone cosy that I wouldn't mind having a go at. The possibilities are endless. Does my napper in when I think about it!! I keep thinking that I must finish the baby cardi before the baby grows into the next size d'oh, but I suppose one more evening won't make too much difference.....
I threw a major sulk this morning as we talked briefly about me going back to work. I don't think I've told Hobbit Keeper the full everything that goes on at work, so his informed opinion is not that well informed. He has said again that I should go back to work on the Main Unit, as offered, at least for financial stability till something else comes along. One of my gripes is that I would probably have to be there at least a year before I could realistically apply for another post due to my levels of sickness. So that would be another year of being shouted at, potential for physical abuse and all the rest of the mind games and crap that goes with the territory.
I feel that my heartfelt leap of faith, my jump to hyperspace, just hasn't been good enough. Things happening for a reason is a bitter pill to swallow at the moment. I don't want to give it much more thought. It's not the first time a husband of mine has told me to carry on working in a violent environment for the money or to help keep the roof over out heads. The motivations have been different each time. But it does make me think back and opens a can of worms, half my head is back in another, much darker time, a time which still haunts me.
Anyhow enough of that morbidity.
The chicken DesRes is coming along, nearly finished.
Got some Banty eggs from Mum today. They're are small compared to what we're used to, then again we do normally have the large eggs. We shall have to get used to smaller eggs, can't wait, cos they're are going to be soooo delicious. Fancy just going into the garden and getting fresh eggs!
Posted by CarpeDyem at 18:12 2 comments:

I'm trying to take photos of my yarn so I can sell them on Etsy, and I just can't get the lighting right. It's either too shadowy, too yellow or too dark. I'm finding it quite frustrating. But then again it's a really dark day, so not a lot of natural light. Plus I'm feeling quite anxious and uptight today anyhow. Not getting things as I want them and being frustrated by it is definitely not helping my hypersensitivity. Best to walk away and leave it for now till I'm at least feeling more patient!

Had a meetng with my Manager and HR, they still say the option is open to go back to work when my sick note runs out. I really don't want to work in that sort of environment, I'm sick and tired of abuse and the potential for abuse. With no recourse or redress, it's pretty crap really and I don't think I should have to face that on a daily basis. I want to jump ship but there is the question of the mortgage. Or is it a case of taking a leap of faith and gettting out of there and working the agency for a bit? Dilemma! He wants me to stay at work, to remain financially stable - he has got a good point there!

What they have offered me is what I asked for in the first place but was refused it. And that was before I Made the decision to leave. Swings and roundabouts.

If I think about it anymore at the moment my head will fall off! I've got a tension headache pending. I need to use at least an hour or two doing something mindless - definitley not Daytime TV and I doubt it very much if it will be house work, but you never know! hahahaha!

Chickens
This afternoon, we went to Look At Chickens. Chickens that will live in the Garden and lay plenty of eggs. I think I shall be quite taken up with Chickens. He is currently building the Chicken House - a DesRes for Chickens, the Run got built over the weekend.

Knitting
Am currently trying to dye Cotton yarn with food dye. It's taking so far, but then again it is still in the soaking in the dye bath stage.......

I'm slowly getting around to setting up CarpeDyem on Esty, and am finding numerous things to do instead of taking the Big Leap, like seeing if cotton yarn will dye, straightening my Room, looking at everything and seeing potential. I've done a List of Things To Do, and I might, just might be able to cross one or two things off.
Posted by CarpeDyem at 15:53 5 comments: