Back from the Hairdressers

I'm back from the hairdressers. All happy and excited, getting my hair coloured in about two weeks, after spending about two years of growing all colour out and getting it in good condition! It's the smaller things in life that make me happy!
Posted by CarpeDyem at 12:03 No comments:

It's mid week, well Thursday, just past mid week. I'm working this afternoon and at the hairdressers this morning. I'm also hoping to get a couple of letters written this morning. Not to mention the housework.......


I'm feeling a little frustrated about a recent job application. I went to interview a few weeks ago. I had an email yesterday stating that I was successful at the selection event and my application will be progressing and HR will be intouch to confirm the next stage of the application process. WTF?! I'd want to read between the lines and think this is a conditional offer pending clearances and references - but it doesn't say it is. Or is it just the language I'm not used to? It's certainly not the usual NHS/Healthcare Jargon. I just don't know whether to get excited or not! Although I do think there is room for a little excitement. On the flip side of it, if I had another job offer, then I would be sorely tempted to go for that one as this one seems longwinded and the application process not clear. At this stage of events a conditional offer should be made, but is this just a process that is unfamiliar to me as I haven't worked for this company before and undoubtedly has it's own 'language'.

On a plus note, I'm on a promise for a couple more chooks on Saturday! The girls are doing well at the moment. They are having extra grit, mainly because little Roast is not eating enough grit and has tried to lay a couple of soft shelled eggs. Guess had a bad night a couple of nights ago and had an off day, but she's back to normal now.

Things are sprouting in the garden. The early potatoes are starting to put in an appearance, as are the radishes, beetroot and lettuce. The courgette seedlings are doing well - anyone want a couple?! My fenugreek seeds are a bit dodgy, but the smell is nice! I hung my uniform to dry near them and I smelled of fenugreek when I wore it....... I have one jalapeno seedling and five or six of the other variety. The rhubarb is doing grand - rhubarb pie at the weekend I think in a sweet pastry perhaps, hhmm.

Knitting? Not had much (read 'any') time for that this week so far. I'm still working on my Stolen Moments Wrap. I started the Mystery Shawl from Lets Knit on Monday. I need to get cracking on a couple of cloths for a Round Robin - work for this weekend, in between worring about my new chooks!
Posted by CarpeDyem at 08:25 3 comments:

On Ravelry, I'm a member of the Secret Sisters Yah Yah Club. A KAL (Knit-a-long)
has begun - The patterns is Amy Swensons Stolen Moments Shawl. Unfortunatley due to geographics, I'm not able to join in person some of the other Sisters on Saturday to participate in the KAL in person!

I'm using a slightly different gauge - mainly as I wanted to use something from my stash. I dug deep and found some Wendy Fusion. As mentioned in the pattern, it works well in any thickness of yarn. The colours are bright and spring/Summer like - bright oranges, yellows, reds and a fresh green. 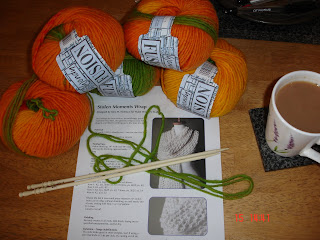 So here's me about to start yesterday. Yarn at the ready, pattern downloaded and to hand and the ubiquitous cup of tea! The needles are 'American Holly' from Books, Yarn and More. I'm a member of their Monthly Needle Club.

I spent last evening knitting the start of the shawl. This is it so far! I'm happy with it. It will have to be blocked when it's finished. When! 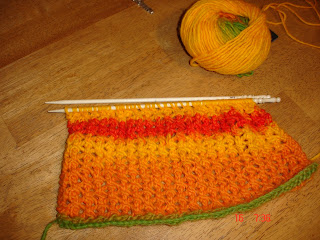 Posted by CarpeDyem at 11:25 No comments:

Tavish often sends me potholders that she has crocheted. I can only crochet basic stitches, although as a child I learnt to crochet lace - fine and intricate. All that is locked somewhere in the deeper rescesses of my mind! Looking at Tavishes potholders and coasters, I decided to have a go.

I started a couple of weeks ago with a coaster. The first attempt came out saddle shaped. The second one was flat but needed much tweeking and closer attention being paid to the amount of stitches and where they were placed. The third coaster was more successful. The picot edge was not quite evenly spaced, especially where I ran out of yarn with only two 'picots' to do!

So after recieving and being inspired by Tavish's Informal Spring Parcel, I thought I'd have another go at crochet. This is the inspirational Spring Potholder. Next to it is my first square. 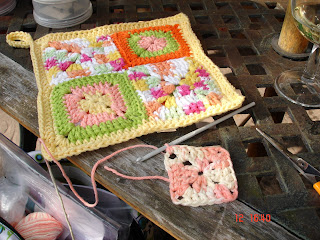 Ta-da! This is my finished potholder, holding it's own flanked by Tavish's Spring Potholders. Just to the right is KnittyWittyCarina's potholder and to the left is a fish - one of the first things that Tavish sent to me. 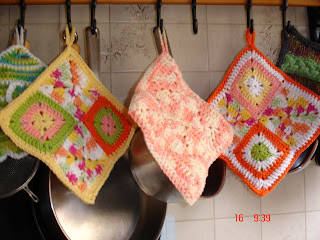 A close up of my first Crochet Potholder! Thanks so much to Tavish for her potholders and for inspiring me to take up my hook! 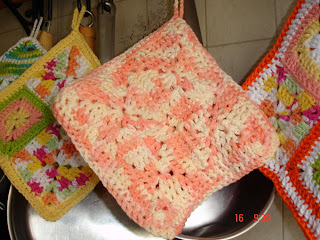 Easter in The Garden

We have been spending more time in the garden - planting and sewing. HobbitKeeper has constructed netting cages over the beds that we've sewn to keep local cats from planting their messages. They seem quite effective so far. There is nothing worse than seeing a freshly sewn bed with cat poop in it, then knowing that whatever is sewn there probably wont grow. 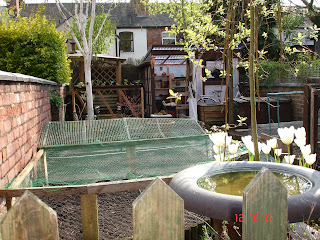 Let sleeping dogs lie! Rhinog taking a nap, days in the garden - following HobbitKeeper and Momma around, watching for Fairies (cats) at the bottom of the garden as well as keeping an eye on the chooks can be very very tiring! 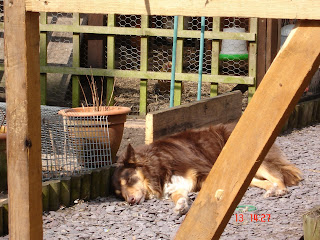 Oregano, parsley and corainder seeds germinating along with HobbitKeepers tomato seeds. My toms are on the window legde in the back bedroom (aka my knitting room) and are doing much better. I've also got cress, mustard fenugreek seeds on the go, as well as two types of chillis. 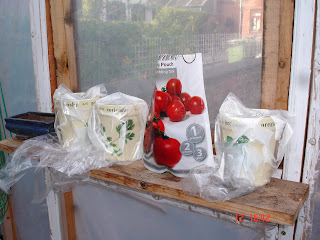 These are the courgette seedlings. We've done very well with courgettes in the last couple of years, so I've got high hopes for these! A lot of the plants will be given away, as we only need a couple of plants but it just seems such a waste not to plant all the seeds in the packet. 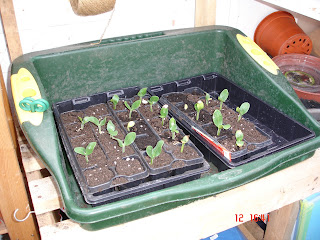 I'm transplanting some strawbery plants into guttering. The frame is for raspberry canes - of which we've planted three. As we've got a small garden we try to maximise space and think three dimensionally. We grew some strawbs like this last year rather sucessfully. The slide in my hair is from Tavish in Tonawanda! 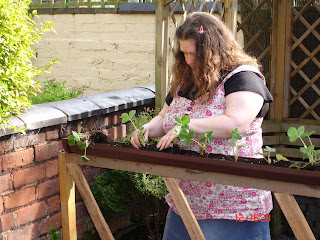 In the bottom corner of the garden, where the arbour is, we're going to make into a secret and quiet area of the garden. So HobbitKeeper has built the frame. He's also put a conifer in a pot. The area will have 'pretties' in as well, so it will be more of a proper garden rather than a funtional garden.
The chooks are finding it very frustrating at the moment as we can't let them out of their run so they can have free range of the garden. Not only would they eat every worm in sight but they would eat every seed as well! When a worm is dug up, they are given it though, so they don't miss out on that score! The chooks are doing well however! Young Sage has made a full recovery from her frostbite in her comb. She is laying now, so the worry levels are down for me!

Posted by CarpeDyem at 10:41 No comments:

A Walk on Doxey Marshes

On Sunday, HobbitKeeper took me for a walk to one of his newly found favourite places to fish - Doxey Marshes. The marshes are within walking distance of home. The far end where we walked, we drove to. It's only about two miles from home. The pictures aren't in proper order of walking...... 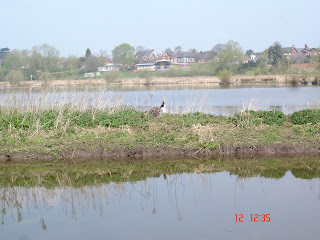 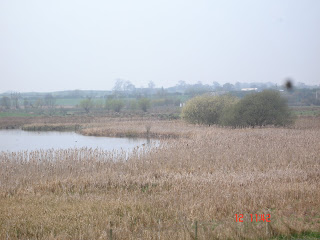 This is part of the Management System of the marshes. I don't profess to know the wrongs or rights of management of such a place, but... this is ugly and out of place! Other attempts of controlling the water pools and making 'dead' areas of water have been overtaken by nature - banks have been broken and huge chunks of concrete are now inches below water. I can't understand the politics of this type of water control. 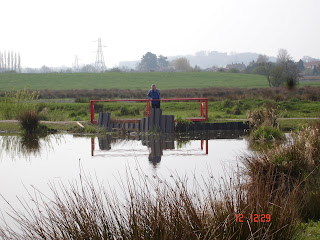 This is another example of the management - creating banks and dividing water. The only reason I can see for doing this is to create areas for the Canadian Geese and other birds to nest in. Apparantly the amount of geese there in the height of the season is phenomenal. 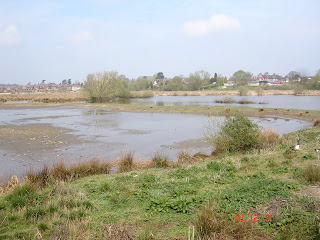 There are even cows on the marshes - running cows - these cows don't walk, they run! 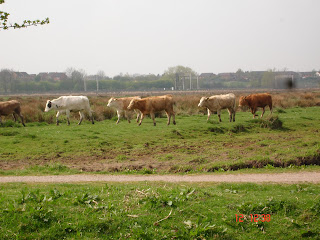 HobbitKeeper planning his tactics when the Fishing Season opens! 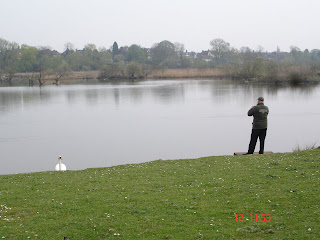 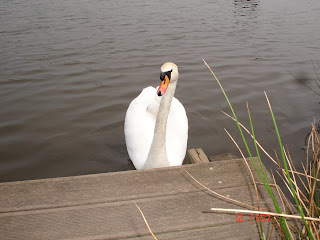 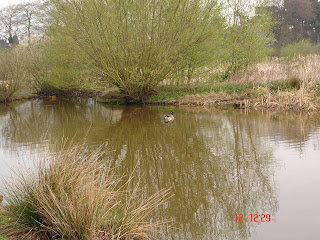 Posted by CarpeDyem at 09:42 No comments: