Mary-Jane and I (and M) have had a busy day today.  At half ten we headed out to do the weekly shop, plus one or two errands M wanted to do.  We got back about a quarter to four.  Mary-Jane did very well, considering we were out for so long and she was mainly sitting, strapped in various chairs.  MJ wore her new Christmas Coat for the first time.  She was so happy with her coat and her new found freedom to roam the house, that she didn't stop to pose for the camera.  She also took one of her bags with her and put her Mickey Mouse toy in it. 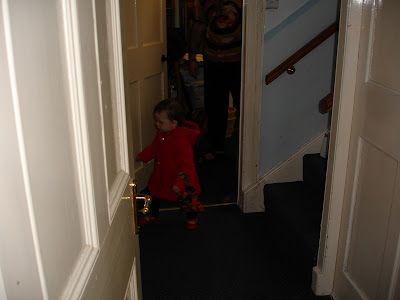 She really looks good in her new coat. 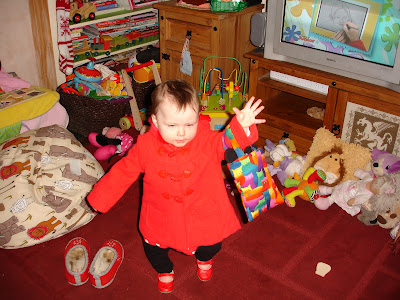 One of the errands M wanted was to get Mary-Jane a new Mr Snuggles.  Mr Snuggles is something she has had since she was about 6 months old, or there abouts.  It is a little snuggle blanket, not even 12" square, one side is a plush fleece type fabric and the underside is a soft satiny one.  In the middle is a bear head and two paws that you can put your fingers in.  There is also a bell in the head.  You get the general idea.  For a couple of months, Mary-Jane has not been parted from Mr Snuggles, day or night.  Before this, she would leave him on her bed during the day.  As you can guess, this leads to the issue of trying to wash and dry Mr Snuggles without his absence being noted.  This is why she has a new Mr Snuggles.

She did initially take to Mr Snuggles II, but knew he wasn't the one.  The One is marked for a long over due bath in the washing machine.

Whilst walking from the shop back to the car, we bumped into Auntie E.  Auntie E was walking to the supermarket where we were going for lunch so she joined us.  Auntie E is actually Mary-Jane's Great Great Aunt.  She will be 91 later this month.

After lunch, and leaving Auntie E to do her shopping, we continued on to do ours and returned home.  I did bump into one of the Knitting Ladies, stopped and had five minutes with her.  That was pleasant.

Once home and unpacking the shopping, Mary-Jane wanted a pick up - mainly so she could be in the kitchen and not in the front room.  She protested when I went to put her back in the front and our heads collided.  Not hard at all mind.  But I got caught right on a pressure point and went dizzy.  I had to put MJ down immediately and sit down before I fell down.  It was over an hour before I forced myself to get out of the chair and to carry on.   I didn't have much to do, so I can't be over melodramatic, but I did hang onto furniture whilst walking around.  It took a few hours to completely come round properly.  So glad I wasn't on my own for that!

I have continued with the Sereknitty tonight.  I think I have only done about 10 rows.  It feels like more.  I think I have just over 100 rows to go, and increasing probably teh same amount of stitches.  At the moment, I feel that if I put it down and do something else, it won't get finished for a long time.  However, the colours are chirpy and keep me going.  Perhaps the challenge I needed lay in the type of stitch rather than the amount!  Never mind, I shall plug on and try and feel good about it - or should I be feeling more good about myself???!
Posted by CarpeDyem at 22:40

Love the red coat and the red shoes that go with it.

Thank You, I love them too! It seems that it is a essential for a young girl of a certain age to have a red coat for Christmas!