The Anglian Cross at St Pauls Church at Irton, is set on a slight rise on the coastal plain.  It is second only to the Norse cross at Gosforth in terms of interest.  It is however, slightly older, dating from the middle of the 9th century.  It is also the only Anglian Cross in Britain that has retained it's cross head.


The cross is decorated in a style known as late Northumbrian.  It was standing long before the Scandanavian Settlers arrived.  All its faces are richly carved.  The first and second pictures are of the west face and the third is the east face.  The west face has two panels of interlocking knotwork that is seperated by a section that once had three lines of runes 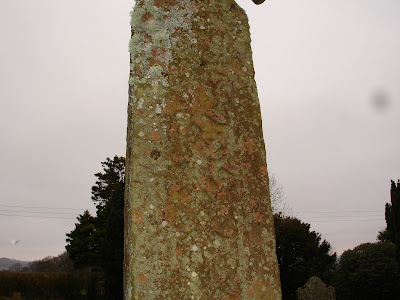 The cross stands 3 meters high.  It still rests in its original socket stone.  It is carved from a single block of red sandstone. 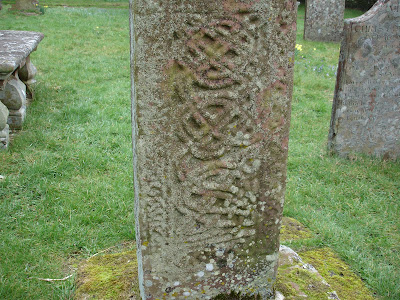 The east face is slightly more weathered and has two panels of diagonal designs and two spiralled cirles.  Unlike the cross at Gosforth, it does not bear any figures, either human or animal. 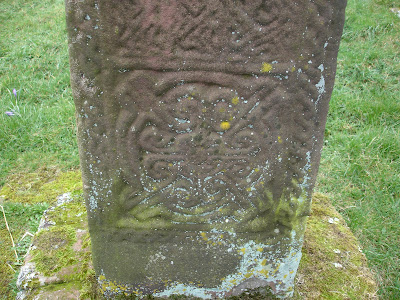 The view in the direction of the old Vicarage (I think). The cross showing the west face 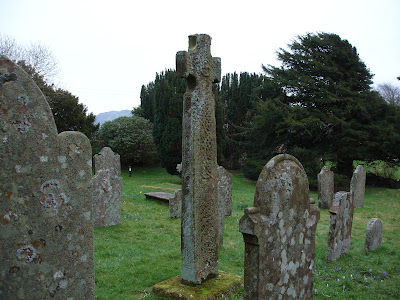 The stunning backdrop of Wasdale Fells.  Nestling amongs the trees are the settelments of Irton, Bolton and Santon.  I shall be back on a clearer day.  Next time I go, I shall also show you the windows of the church.  At least one was designed by William Morris. What a great post! Now I want to go there.

Haven't forgotten about you, even though I've been rude and never even properly thanked you for the bookmarks! They are lovely, and are getting well used. :)

Hello Lee - Great to hear from you! Glad the book marks are getting good use - I thought they would be, and it seemed fitting that you had them!

If you ever come anywhere near this neck of the woods, I will take you to all these wonderful places - we could even sit and knit and soak up the atmosphere!

you are so lucky to live in such a beautifl area.

You bet I'm lucky! I will try and take you round when I explore and go places. There is so much here, it can blow you away!