This afternoon, M and I went to a Victorian Afternoon Tea in a church hall at Seascale.  It was a delightful afternoon and we both came away feeling like we had eaten too much cake!  Yes there were cucumber sandwiches and not a crust in sight. This is the table as we sat down. 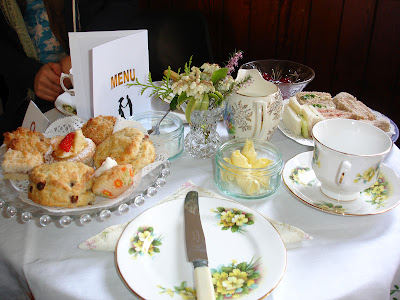 The waiting on staff were wearing victorian style clothes and lace aprons.  We were also served with meringues and cream, a gorgeous strawberry cake - the sponge might have been genoise or angel food cake.  It was one that was very light, not a victoria sponge at least.  We had two pots of tea and offerings of extra sandwiches and even more cake - which we declined gracefully but very temptingly.

I was expecting the usual raffle, but instead there was a 'guess the weight of the cake' - a beautiful Simnel Cake and a 'guess how much money in the jar'.  I also bought a plate of about half a dozen small cakes to bring home.

M and I sat and talked of village life, the pro's and con's of being an outsider, and how rural life differs from city life.  I think if I went to a big city, even to go shopping for the day, I would find it quite anxiety provoking with all the people and buildings etc.  I'm sure I'd cope though, plus it's not likely to happen for quite a while!

At the back of the hall, where we were seated, there was a display of Vicoriana.  The things I liked the most were two cross stitch samplers.  One was dated 1840, I can't remember the date of the other.  They looked genuinely done at that time as well.  It made me think of mine - dated 1992, when I was 24.  Gosh, 20 years ago, now there's a thing.

Early evening I had a phone call.  It was a lady from the Afternoon Tea - I had guessed the right amount of money in the jar!  My prize is the jar of coins, all £8.29.  I was thrilled and got quite excited on the phone!  I thanked the lady and told her how much we had enjoyed the afternoon and would love to attend again if they did another.

Rhinog and his new brother, Bandit are getting on really well.  Bandit is now allowed to run round the garden off the lead.  He has filled out since he arrived and is nowhere near as nervous and timid as he was.  One of Rhinog's all time favourite games is playing tug of war with a ragga.  He loves it just as much when there is another dog on the other end of the ragga and they can run round like ijits having lots and lots of fun! 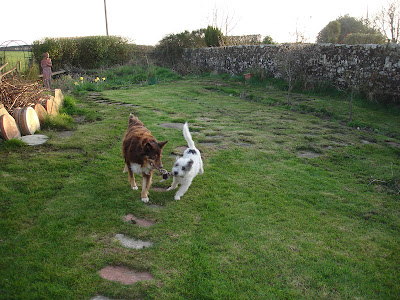 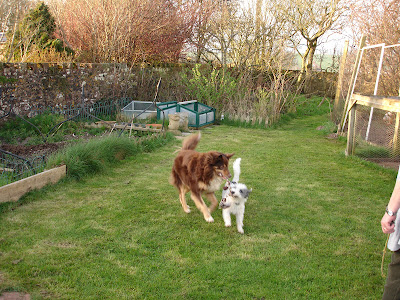 Your grass is SO GREEN! Bandit looks adorable. I'll bet Rhinog loves having a sibling again.

Bandit is settling well, they both seem to enjoy each others company. Rhinog is watching out for him and trying to keep him on the straight and narrow. They are never far apart from each other.

The grass has just had it's first cut of the year.