Another busy but smooth Sunday.  I awoke before 7, HK and I decided to get up and have a quiet cuppa before Mary-Jane woke up.  It took HK and I about ten to fifteen minutes to get him up and out of bed due to his back, pain and limited movement.  By this time Mary-Jane had awoke and was crying for us.  HK managed to get down the stairs and I changed Mary-Jane's bot bot, then bought her downstairs.  I finally got her into her TSJ for the first time.  It fits her brilliantly.  I am very pleased with the result.  Mary-Jane didn't want it on long though! 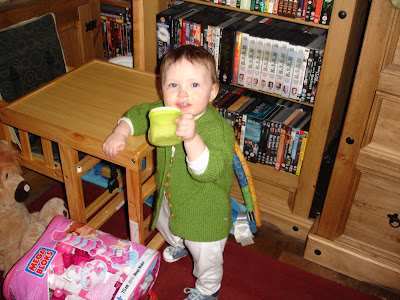 H's back did loosen up and get slightly less painful as the day went on.  By late afternoon he was starting to stiffen up again.  He has agreed to get a GP appointment tomorrow.  I just hope the GP is half decent, looks into the back pain and refers him for tests.  So with HK incapacitated, I set to doing his chores.

Here is the New Sexy Country Look for me!  I'm off to loose and feed the chooks about half seven this morning.  I'm wearing my dressing gown underneath the coat and HK's boots as my wellies are in the car.  And when I say that HK was getting ahem, frisky at my attire, I mean it!  We had six eggs this morning.  Egg production is coming along and we have lots of surplus eggs - I'm threatening to pickle some in the next day or two. 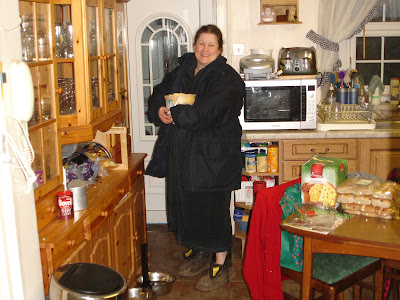 Mary-Jane is slowly getting over her cough/ not being well.  She is eating a little more, not quite up to normal yet.  She had some chocolate this afternoon and if you look closely you can see some on her chops. 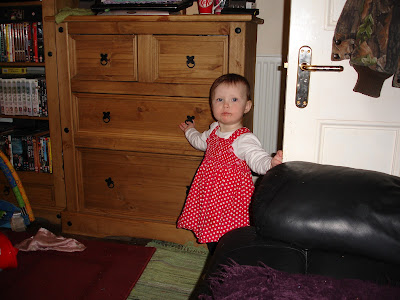 Early afternoon Mary-Jane started to get tired.  She can't really lie back and slob on me the way she can on HK.  HK in these situations, has been trying to encourage, with a degree of success, to lie down on the sofa with her head on him.  I put the new Bow-Ties quilt on her and grabbed the camera. 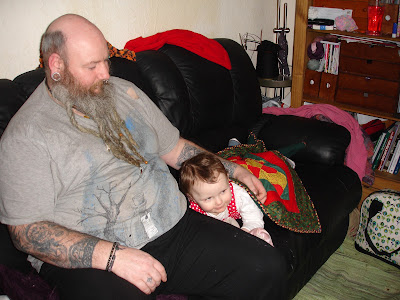 Later, Mary-Jane had some time having a 'walk' in the house.  She likes going into Gramma's room, striking a few keys on the keyboard and running around the table.  She also likes running and playing in Grandad-dad's room (aka the library).  She likes to sit on his knee and rummage through the desk drawers and play with his pen tin.  Today, she was sat in Grandad-dad's old rocking chair, on the opposite side of the desk and played with the pens there. 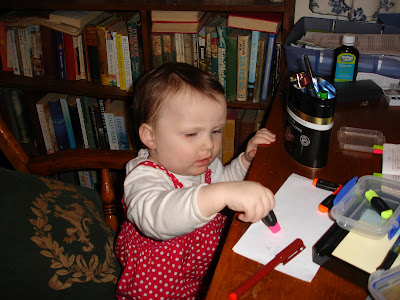 I've also made a bread pudding this morning.  I put a little more milk and allspice in than last time and it has come out well.  I made a pastry for a quiche as well, but this shrunk so much that I couldn't use it, so the chooks had that.  Apparantly pastry shrinking like that is because I put too much liquid in it.  Now I know.

I have been lucky enough to have a couple of hours in front of the idiot box this evening, knitting Sereknitty.  I was too tired to contemplate doing any lace work, just needed straight forward 'TV Knitting'.  I am going to need more yarn if I am to do the required amount of rows - but will check what measurements are given in the pattern.  I do have another ball, fingers crossed it is the same colourway.  I have a feeling it might be.  Then I had the thought that the rest of the second ball could make Mary-Jane another TSJ - how snazzy would that be in the yarn?!  I have taken the gauge and it is the same as the green pea yarn that I have just used.  Bonus, not that the sums or formula are in any way difficult!

I also got an email back from the lady that I contacted about The Magic Bow-Ties quilt.  She stated that the Wordsworth Quilters are now no more. She sugggested that if I go to the local quilters group (which I have attended two or three times), perhaps I could show it in the 'Show and Tell' part of the meeting.  She gave me the name of two ladies who attend the group who may be able to tell me a little more about the quilt.  She believes that it was made as an extra prize in that years raffle.  The main prize in these types of raffle are usually a double or king sized quilt, made by members of the group.  I suppose there is little else to find out.  The group  meet this Wednesday.  This week is going to be fairly busy for me, especially if HK's back doesn't start to get better.  He thinks it may snap better in the next day or two, as that is it's normal pattern.  Time will tell.
Posted by CarpeDyem at 23:17