Owing to Mary-Jane's recent trips to play parks and thoroughly enjoying them, HK and I have been having serious thoughts about getting Mary-Jane a swing and a slide as an early birthday present.  We have squirreling funds for birthdays and christmas.  We thought it was better to get her such outdoor toys/play equipment at the start of the spring rather than at the end of August when her birthday is, so she can get more use from them.  Not that she particularly understands birthdays and presents, she does understand fun, slides and swings.  We went to Argos in Whitehaven this morning after breakfast, and got her a slide and a swing.

HK had the slide assembled just after dinner.  Mary-Jane was thrilled to bits.  She even knew it was a slide when it was upside down.  In a short space of time, she began to learn how to climb up the steps, indeed she can now get to the second step by herself.  Not that I would allow her to climb any further unaided.

Here is the happy girl, with Granma, atop of the slide 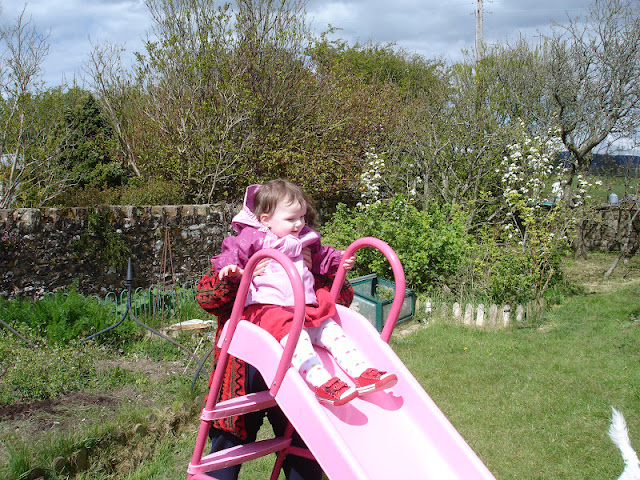 Having lots of fun, giggling all the way 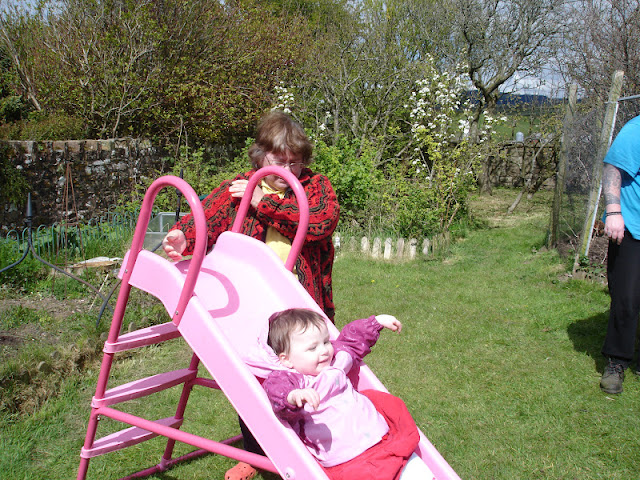 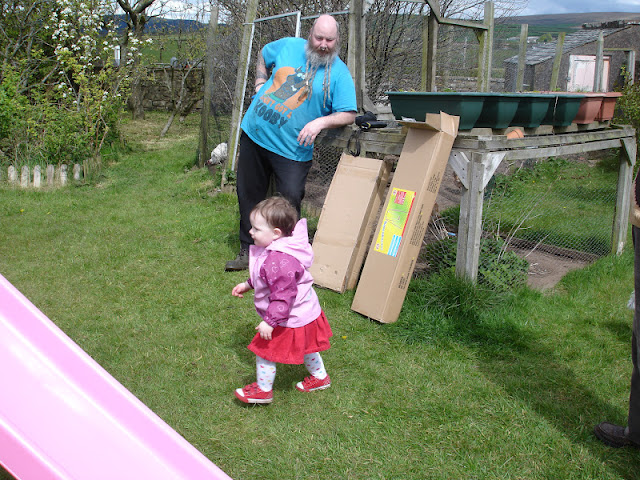 Running round to have another go, looked on by HK and Grandad 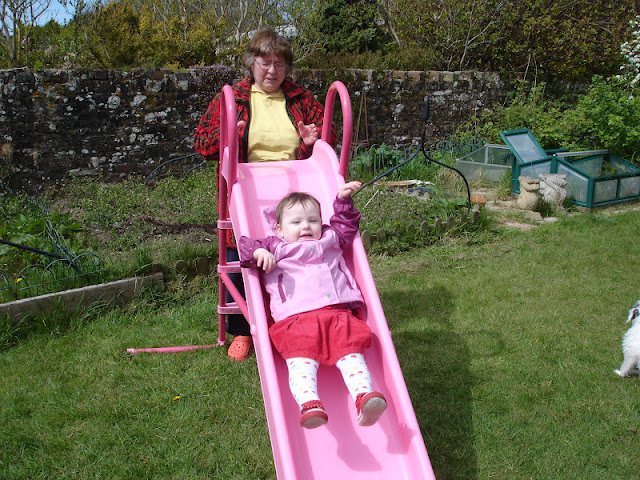 Aloft the slide, this time with Momma, with our neighbour watching the fun! 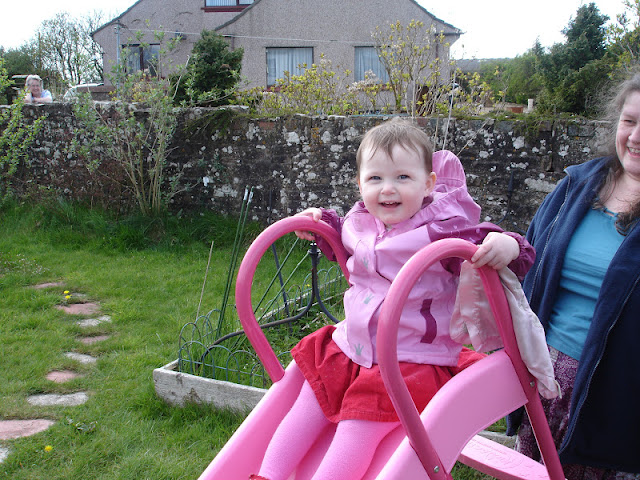 The swing is lots and lots of fun as well 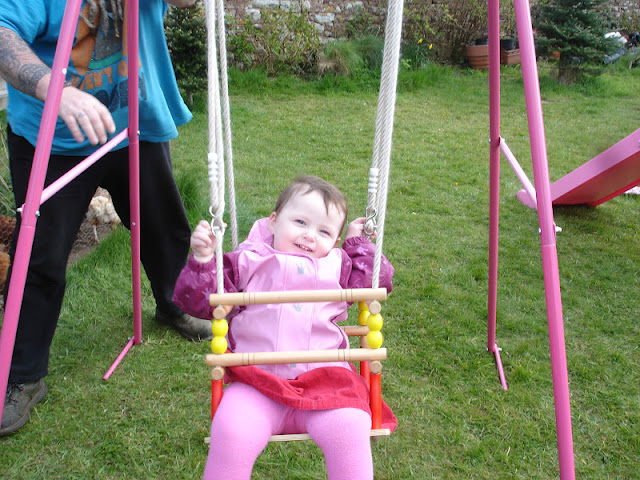 It's that much fun, that Mary-Jane had to share with Mr Snuggles, he had a go on the swing and several goes on the slide by himself, much to Mary-Jane's delight! 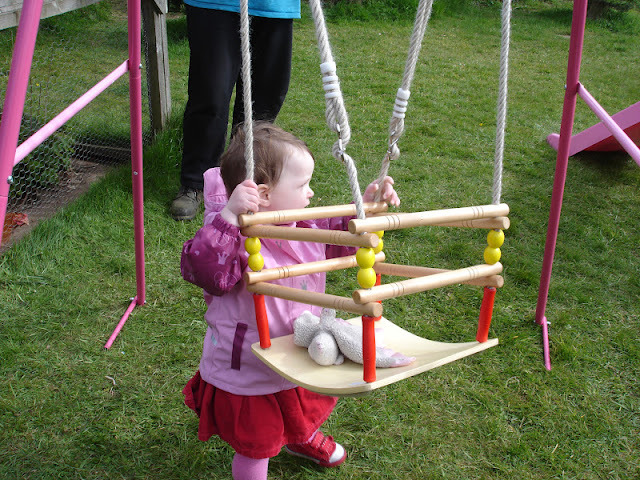 When it was tea time, and time to go in, there was minimal protest from MJ.  I put her on the sofa to take her coat off, once this was off, she didn't budge for a good ten minutes.  She was one tired out little girl.  She had slept well the night before and fingers crosee, has slept well so far this evening.  All we can think of for reason for her very late night, was that she may have had belly ache, she has been a pooping machine since, going twice a day instead of once, but hey, you and her won't thank me for broadcasting her pooping habits to the world!

Her talking is coming on in leaps and bounds, she can string small sentences together - Mary-Jane have a nap, is a new one.  She can't quite say her name properly yet.  She likes to say 'night night everyone' and 'na night everybody' when she goes up to bed.

I ahve made the banana and fudge cake - have I already told you?  I will give you the recipe tomorrow.  It's tasty.

Knitting - I was going with the Crescent shawl.  I have started the lace section.  I have also realised that I am a bit too tired the last few evenings to concentrate properly on lace work, so I have put it down till I have a bit more about me.  I wanted some simple TV Knitting to do.  The mood came upon me a few days ago, to do the calculations for an Elizabeth Zimmerman Adult Surprise Jacket.  I cast on last night.  Tonight I undid it all and cast on again.  The stripes weren't quite in the right place and I misplaced the deacreases.  So after seven rows, I frogged it and started again.  I have done one row, but the decreases are in the right place and the stripes should work better.  I am using four different shades of purple, doing a ridge of each colour.  I have a good feeling about this project.  It doesn't seem as daunting as I originally thought.  The cast on count is 405 stitches.  It's not a Stash Buster Project.  I bought the yarn specifically to do this project a few months ago.
Posted by CarpeDyem at 23:16

"I cast on last night. Tonight I undid it all and cast on again."

That sounds like my knitting life right now! I also had a mental meltdown yesterday trying to do some crochet work. My crochet skills are very limited and all I can do is make a granny square, but it had been a long time since I'd done any crochet so I looked online for a granny square tutorial. My GS looked awful and I couldn't figure out what I was doing wrong. I finally looked at a different site and realized that the first site was using UK crochet terminology and I learned US crochet terminology. It's not that the terms are different; it's that the same term is used in both but for entirely different stitches. It's like a language that is comprised entirely of false cognates. So if YOU say "double crochet", I say "single crochet" and if I say "double crochet", you say "treble crochet".

LOVE the slide picture where you caught her with her legs off the I can tell she was TOTALLY into her slide and swing . . . HAPPY EARLY B'day, MJ!

Luneray - My crochet is very similar to yours,I started writing a reply to your comment but it got a bit lengthy, so I shall write a seperate post!!

Paula - Mary-Jane loves her slide and swing, more the slide at the moment. I think the excitement of it tires her out. She has been out playing on them twice today x