Playing In The Sunshine In Beckermet

After the usual Friday trip to Tesco, I was itching to get out again, not too far afield mind, just out to enjoy the sunshine.  We went to Beckermet, to the play ground. It's only about half a mile, but we took the car as HK cannot walk that far at the moment.  Mary-Jane had lots of fun and we had much pleasure from watching her.  She had a few goes on the swings and seemed to like this. 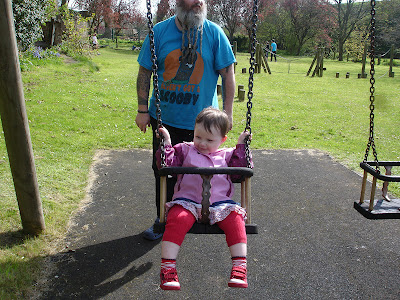 Her favourite is still the  weeeeee slide.  She has sussed that once she get to the bottom of the slide, she can turn round and try to walk up as far up the slide as she can, turn herself around again and slide back down.  She ain't daft. 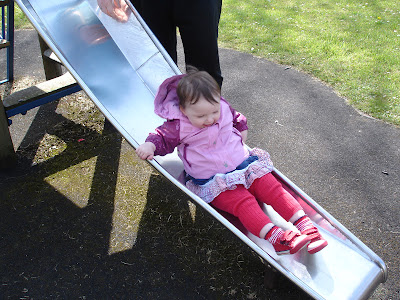 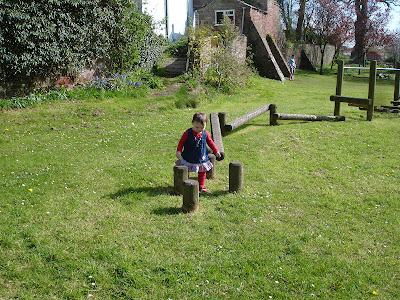 Life is one big adventure when you're nearly 20 months old 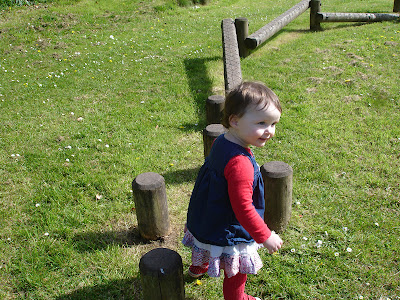 She ran between the slide, the swings and the wooden stumps over and again, I think she was just so excited and thrilled that she didn't know what to go on next. 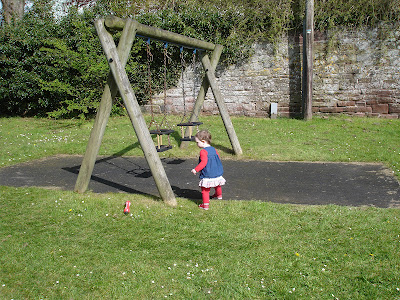 She did have an investigate of the bench and a look in the beck beyond.  This is the same bench that I would come to with Mary-Jane when she was in her pushchair, and would be asleep by the time we were less than half way there.  I would sit on the bench in beautiful spring sunshine and knit some of my troubles away. 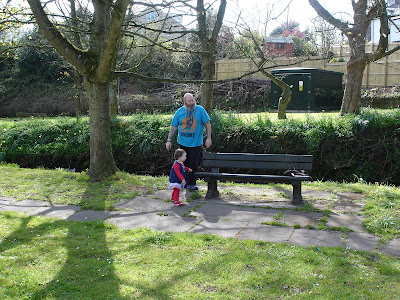 Mary-Jane also had a few goes on the bouncer.  She also klonked her facew and back of head on the bars of it, when she was stood investigating it, I don't think she expected it to bounce as much as it did!  In the background is St Johns Church.  This is one that I went to doing The Viking Trail (which I do have to finish).  It's the one where Mr Snuggles went AWOL.  The bridge in the mid-ground has a sign on it which says it was widened in 1900. 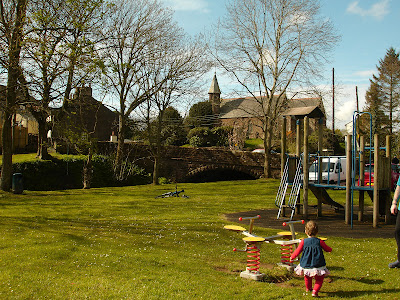 I thought Mary-Jane would have a good nights sleep after her adventurous day.  She went down well at her usual time.  She awoke about twenty to eleven and didn't settle back down until gone 3am.  Unheard of for her.  She didn't seem tired, although she was yawning. In the end we tried to settle her with us in our bed, something we have never done before and don't want to encourage.  All the usual things didn't encourage her to go on her bed and not scream and cry.  Both HK and I were shattered, beyond shattered.  I managed to get a few hours decent sleep after but HK didn't.  We have got everything crossed that MJ has a good night tonight, and in turn we do too.  Today I have been on Operation Tire Mary-Jane.
Posted by CarpeDyem at 22:19

Labels: Playing In The Sunshine In Beckermet

WOuld have loved to see her face when the bouncer bounced back at her . . LOLOL

She was very surprised, shame it got her in the face though! She hardly flinched though and the mark was soon gone. She was brave enough to have another go on it after a while, but was a bit wary.