Another day of not quite frantic baking and preparing for Market is now nearly over.  I have also been out tonight - but more of that perhaps tomorrow.  I have made 15 scones  each of cheese, fruit and wholemeal fruit, 12 mince pies and some Viennese Fingers. 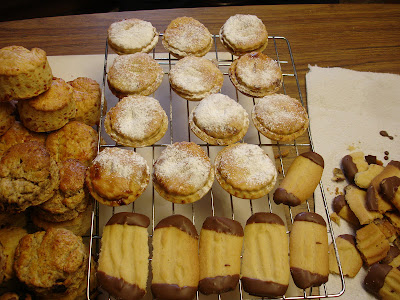 I say 'some' Viennese Fingers.  I was having problems.  First of all I thought the nozzle I was using was too small, so I swapped piping bag.  That was a mistake.  The second bag was more suitable to icing than a thicker biscuit mix.  So I tried to put every thing back in the first bag.  Of course I lost a fair bit mixture, so I made another batch up.  I didn't use a nozzle and made the stripes with a fork.  These turned out better than what I thought they would.  When cooled, I melted some chocolate - far too much actually.  I then dipped both ends of each in the choccy and left them on the wire rack to cool and set, as per instructions.  When I came to move the fingers off the rack, that is when disaster struck.  The chocolate had set the fingers to the rack.  Didn't see that one coming did you?!  I didn't particularly.  The fingers are quite fragile, so out of 36 I ended up with only 6 in one piece.  Bugger.  They do taste very nice though, nice and buttery, as they should! 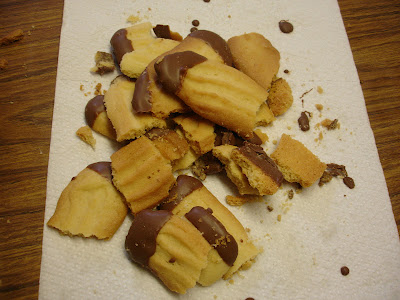 I have been told a way around this, by using greaseproof paper or the inner bag on a box of cereal.  A knife can also be gently used to pry them off as well.  I shall try this.

Here are most of my scones.  They look yellowy on top as I brushed them with beaten egg before baking. 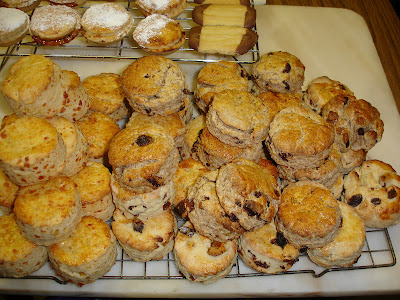 You were busy today! Wow.Good luck at the market tomorrow. I hope everything sells!

A few suggestions regarding the dipped cookies: Chez Luneray, I'd set the dipped cookies on top of a pair of chopsticks; the chocolate could drip off but it wouldn't stick since that part wasn't actually touching anything. This may not be viable since I don't know how easy it is to find chopsticks in the Lakes District.

Have you heard of Silpat? It's a reusable non-stick baking sheet. I have one and I've used it for years! Durable and easy to clean. Again, I don't know how viable this would be for you since you are baking on a much larger scale than I do.
http://silpat.com/ (Rats, just realized that site is for US and Canada only. It's a French product, I am sure they are available in the UK!)

WIll be popping over for some cheese scones tomorrow. They look mouth wateringly good.

I have been asking around and it was suggested to me to put the freshly dipped chocolate biscuits etiher on greaseproof paper or use the lining bag from a box of cereal, so I shall give them a try. I've not heard of Silpat per se, but we do have similar things, so may try that as well!

Paula - you are always welcome!

Well spotted Paula - I had to go back and have a look! I had to change Mary-Jane as she her nappy had leaked a bit, but she was having an awful lot of fun!