Success At The Country Market

The Country Market for me today was a success.  I came home with nothing that I had taken.  I sold 30 scones and 36 eggs.  I also got two orders, one for wholemeal scones and one for mince pies.  I have a list of ideas and suggestions as what to make for next week.  Contenders on this list are - more scones (cheese, fruit and wholemeal), lemon drizzle cake - I might make these as cupcakes, gingerbread (I bought the most perfect sticky gingerbread home with me, I would have a real job bettering it), Herman cake - I'm hoping to do a bit of experimenting with this - apple and chocolate, maybe pineapple - Fondant Fancies, these will need a trial run, Queen Cakes, Madeleines , Fancies with pink Icing and white coconut and a cake similar to a Bakewell Slice but without the almond.  I am thinking all the more about starting a bread sourdough off.  I'm told that bread may sell well.  It may well be worth a try.

If my foot wasn't so cracked and painful to stand on, I might have been tempted to do some experimental baking this evening.  But if I did, that would also mean less knitting time, and I can't have that now can I?!

Talking of which, I have picked up Winter Apple.  The break from it seems to have done me good as I was more at one with it, and was flying through the pattern.  I'm now working on row 29 and it's looking good.  I am starting to get inkling to want to pick up the EZ Pi Shawl and do a bit on that.  I've not done any for quite a while.

Mary-Jane has taken to her Butterfly.  Her Butterfly has rocking chair rockers on.  It has been in her room since we bought it, in the days just before we moved here.  Lately she has beent taking interest in it and enjoying sitting on it.  A few days go, I bought it downstairs.  It is now getting well used! 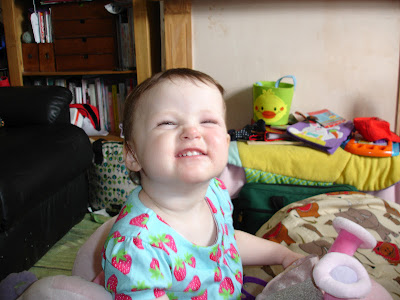 Mary-Jane also likes to sit on top of Daddy's shoulders.  The photo is blurred as she was moving 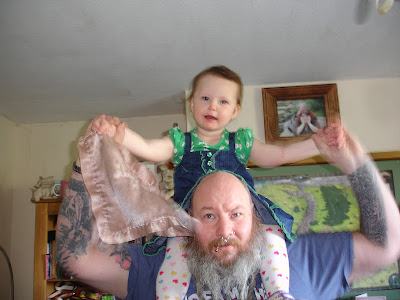 We have had brilliant sunshine most of the day, with not a cloud in the sky.  Along with this there has been a bitterly cold wind.  It hasn't been that bad that Mary-Jane couldn't enjoy a short while out in the garden.  She is wearing my Toddler Surprise Jacket.  She was enjoying collecting small stones/shingle and putting them in the dogs waterbowl, now devoid of water. 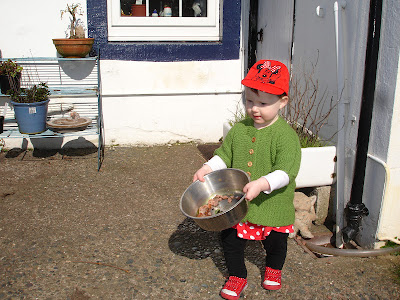 Rhinog was out in the garden with us.  As Bandit stayed in the house, Rhinog had chance to chill in the sunshine instead of racing around the garden like a ten year old pup he thinks he is! 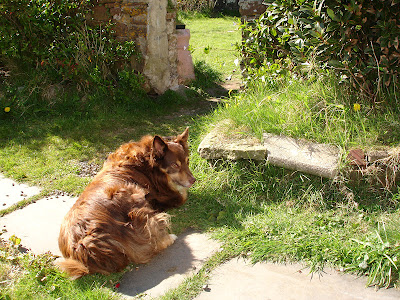 Mary-Jane having a good look at something! 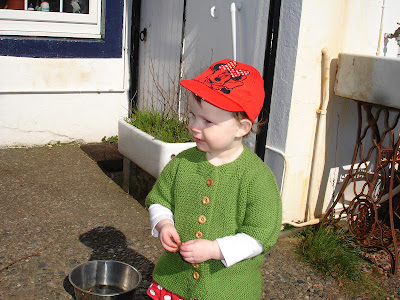 Labels: Success At The Country Market

You MUST crochet MJ a Minnie MOuse hat . . if you haven't seen the patterns, let me know and I will search them out for you

I would love to do that! I quake a little with the crochet, but yes I'd love to give it a go! I've not seen the patterns.....