This has  been- is -  a busy week for me.  Monday night was WI Committee Meeting, Tuesday I was due to drive Dad in the evening, but didn't have to at the last minute.  Wednesday I baked two batches of cakes (more in a bit) and Wednesday evening was WI Meeting.  Today I did the weekly shop, this afternoon I slipped out to Fobbles for a very short time, mainly to catch up with Di and so we could show each other what we have been knitting.  This evening has been the area group meeting.  Tomorrow I'm due to bake loads for the WI stall at Egremont Crab Fair on Saturday.  Phewee!  I feel tired just thinking about it all!  On top of all that, Mary-Jane had a bad night Monday night (did I already tell you?) she was awake from 3.30 and so were we!  We are getting over it now.  It takes MJ around three days to get over one bad night and get back on her feet, I feel just the same!
So, cakes, cupcakes!  More from Cookie Girl Xanthe Milton's Eat Me!  I made Black Forest Cupcakes.  This time I baked them for two minutes less than the recipe and hey presto!  An vast improvement in them.  I also used more whipped cream on top and had some chocolate flakes to finish them off.  They also had a bigger dollop of kirsch mixed in with the jam.  I was quite impressed! 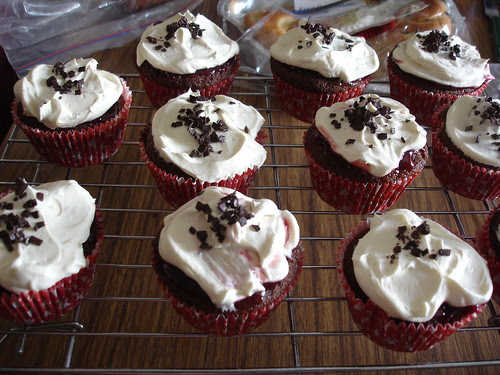 The second batch I made were Cinnamon, Banana and Walnut.  The cakes were slightly dry, only slightly dry for me.  The texture lent itself more to be a loaf than a cupcake.  I will try it again with a bit more banana and maybe a minute or two less baking time.  The topping I won't do again.  Only because it is too sweet for me.  It's 10 oz icing sugar, 2oz butter and one banana and cinnamon.  It hasn't stopped me eating them though at all! 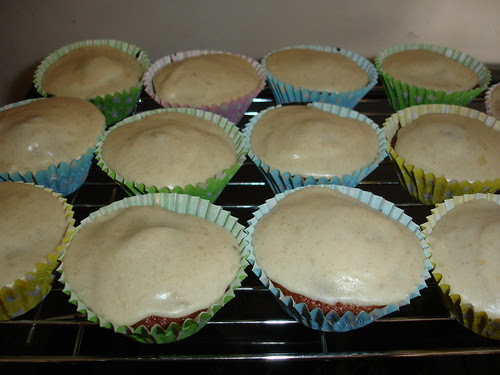 The cakes were primarily made to take to the WI Meeting as a beit of a celebration following our winning first prize at th WI Exhibit at Gosforth Show last month.

Tomorrow may well be a marathon baking session, although I am trying to think about preparation stages - what can be baked together and how much can I realistically do.  One realistic thing is that if I do everything on my list then I will need some more eggs!  I have five eggs, no six if it's not been eaten today, and I need a grand total of 15.  My list runs like this:
I really don't think I will get everything done, but will give it my best welly.  It will be fun.  At least I don't have to bother with decorating them.
Posted by CarpeDyem at 22:36