HK, Mary-Jane and I went out this morning to collect the last two main items of Mary-Jane's christmas presents. When we got back, there was a parcel on the doorstep. It was from Paula, aka Tavish or PaulaGT. It was a lovely surprise as, although I was expecting it, I didn't know it was on it's way. I did squeal when I saw it!
The October swap theme was 'Bathroom Pot Luck'. Paula made me three beautiful baskets. I don't think the photo quite gives them justice. I'm really thrilled with them. I think these kind of things make a house into a home. 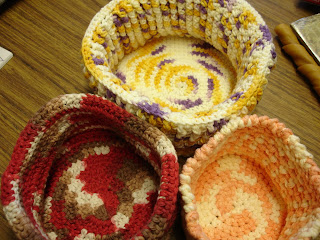 Paula didn't just send items for me. Mary-Jane got two colourful pack of playing cards. I also got a halloween/autumn note pad - these are always handy and I just can't seem to find such things over here. Paula also included a gorgeous hand painted card, with daffodils (Paula's favourite flower, mental note made!). There was also a tin :-) with a pair of scissors and some wool needles, held in place with a magnet - a very useful idea. 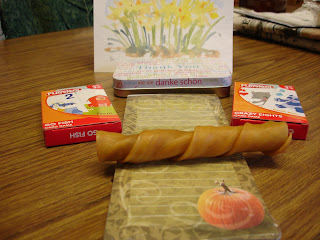 Rhinog was sent, from Indy, a hide chew stick. I couldn't resist taking a close up of Rhinog getting his pressie! 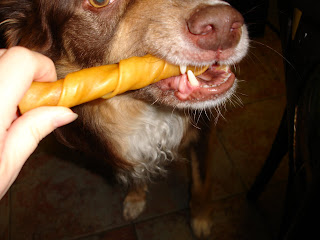 HK was not forgotten either! For him was a bottle of Genuine Hotter Buffalo Wing Sauce. His eyes nearly popped out of his head, one very happy chappie! He nursed it in his hands for about ten minutes before he put it down, only to pick it up again seconds later and mutter something about me getting some chicken in next time I go shopping....... 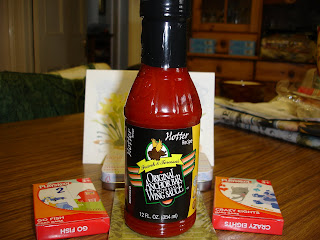 Huge, big, big thanks to Paula for her kindness and thoughtfulness for including everyone! Thankl you!!
Posted by CarpeDyem at 22:14

I am just so happy that everything msde you happy :0}

How could it not make me happy when it has been made and sent by you?!!!