Another hectic weekend acts as prelude to a busy week.  Saturday was good.  In the morning we went to the library.  Mary-Jane got another certificate for her attendance and borrowing books.  She is loving having the library books to read at bedtime.  Saturday afternoon was the Biggie.  The First Christmas Party.  We were first there.  Initially Mary-Jane was very shy.  Ten minutes later she was running round the room and looking at all the decorations and balloons like a very excited two year old that she is!  She calls the room The Big Room - it was in the same place as playgroup.  She joined in the games and singing and actions.  She sat to play pass the parcel - and won fair and square - a box of jelly babies.  She discovered that she very much liked cheeslets (a cheesy biscuity baked crisp, sort of similar to cheddars).  It was beautiful to see her let herself go and have as much fun as she could muster.  After an hour and a half, she was getting tired and asking to see Daddy, a new sign that she is tired.  When Santa arrived she was not impressed.  When it was her turn to go and get her present, she cried and cried.  I carried her to Santa and she clung to me tightly.  She had a Dora The Explorer backpack and a My First Nativity book. 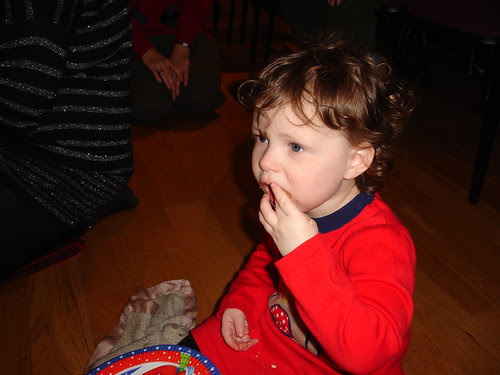 Sunday we went to Workington, just for a blow out mainly.  We had lunch in Morrisons.  MJ did well, apart from when I went for a replacement cuppa as the tea bag had burst, MJ took flight and started to run around (looking for me I think), so Gramma had to chase her.  I caught her, sat her down again and she didn't try to get up until we were ready to leave.
Sunday night Mary-Jane wasn't much in the mood for sleep.  She awoke after midnight, screaming.  Once she settled back down again (after much more screaming), she awoke again just before four and was quite certain that she wasn't going back to bed.  She did have a few naps inbetween Daddy and I.  So this morning, indeed all day, we have have been tired.  MJ finally fell asleep when Daddy was making her tea.  She fell into quite a deep sleep for ten minutes or so.  So far, touch wood, we have not heard a peek from her!  We need as good sleep - play group tomorrow!
This afternoon was Woodlands Knitting group.  I was toying with whether or not to go, due to tiredness.  I had perked up and I decided that it would probably do me good.  It did.  I took some crochet for a change.  I am making a prayer shawl for a friend.  I am using James Brett Marble chunky, the same stuff that I used for the Apple Shawl.  It is showing off the colours really well.
My head is still quietly stuffed full of recipes from The Pink Whisk's 12 Days of Christmas.  I haven't had the opportunity to do any.  I did defrost the butternut squash puree to bake with yesterday.  As yet no baking and the puree is still in the fridge.  Will have to check on it and if its okay, then baking tomorrow afternoon is hopefully on the cards.
Posted by CarpeDyem at 21:56