IBS has rocked my world today.  I have not had it this bad for a very long time.  If I had had tablets to take, I would have.  It drains me and makes me feel really miserable, as well as all the regular symptoms.  It is much better now, but it is still there.  It used to be this bad when It Was Bad.  It has been worse than this.  Tsk.

On to pleasanter things 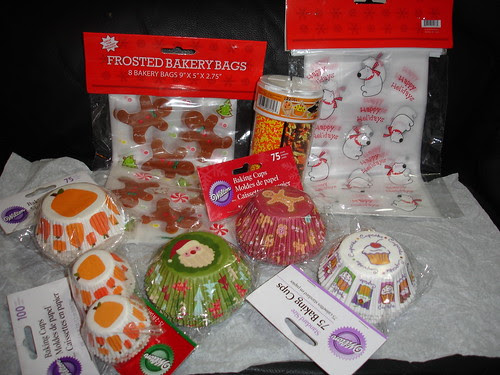 I have made some Coconut Ice.  I haven't made any before, that I can remember.  After I made it, I mentally put it on the list of Things Not To Make Again.  It is very stiff to mix, to the point it was starting to hurt my delicate hands (!)  I did think to ask HK to stir it, he had Mary-Jane resting on him at the time, so I didn't want to disturb them.  I tried dyeing half of it pink.  It came out orangey.  I was a little disappointed. I like coconut ice.  I always beleived it to be difficult to make.  I think now that it might have been more of a cast that the ingredients were expensive, back in the day.  This evening, I cut it up into bite size pieces and tried some.  Coconut Ice is now on my To Make Again List.  I have introduced a sub-group to this list - Ask HK To Help!  I may try it with cocoa.  I don't know if it would be too sweet coated half coated in chocolate?

Talking of Chocolate - yesterday I have the lastest edition from the Food Heaven magazines drop through the door - Chocolate Heaven.  I haven't looked through all the magazine yet.  There are a few things that are tempting me straight away.  The prime thing is Banana and Chocolate Chip Flapjack.  I first tried Banana Flapjack at Beautiful Days in 2005 and instantly fell in love with it, perhaps that why it was called Banana LoveJack - or was it because it was made by hippies?!  I tried re-creating it myself with a degree of success, but not quite the same.  Bananas are definitley on this weeks shopping list.

I am doing well with my Aran Jacket by drops designs.  I think I have been salling it my Decimal Jacket, but I have just remembered that the Decimal Jacket is actually a cardi that I am knitting in a pink 4 ply chenille style yarn.  So here it is anyhow.  I have finished the cabling and am working 22 rows up to the armholes.  It looks really big, no doubt will be snug on me.  It is going to be very heavy to knit, the more so as I go along, without stating the obvious.  Achey neck is will be coming on to the horizon. 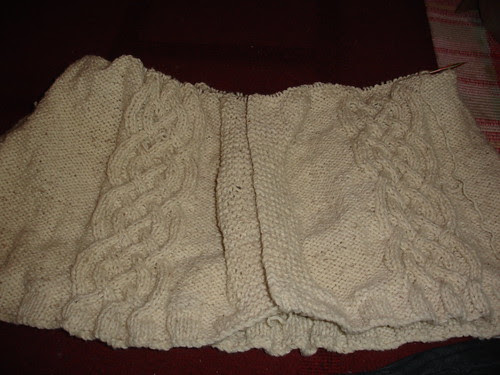 Did I tell you that Mary-Jane has had a few early mornings of late?  Today and yesterday she has crashed and burned, but only managed to have a nap yesterday, whilst 'Ready, Steady, Dink'ing on Daddy.  Ready, Steady, Dink, is MJ sitting between Daddy's legs whilst the foot recliner is up.  She can't resist sitting there.  She sits there quite often when she is tired and needs a rest.  And more often than not, watches Tinkerbell.  Sleep overcame her this time. Auntie Annie - did you arrive back safe and sound?  I am missing you!
Posted by CarpeDyem at 22:54