I still have a stinking cold.  Luckily I don't feel as bad as yesterday, so fingers crossed that it is breaking and doesn't linger.

This afternoon, Mum, Mary-Jane and I went to St Bees Head.  The last time I took Mary-Jane there must have been about a year ago, if not slightly longer.  Or was it?  I'm begining to wonder now.  Anyhow.  Mary-Jane was so excited about everything.  So much so that she totally by-passed the swings that she had seen and squealed at from the car.  She announced that she was at the sea-side and at the beach, with out any prompting from me.  She has learned about beaches and seasides and ice cream from telly.  The sea was 'water'.

Once we got on the beach, I let her run free.  She was on a mission to get to the sea. 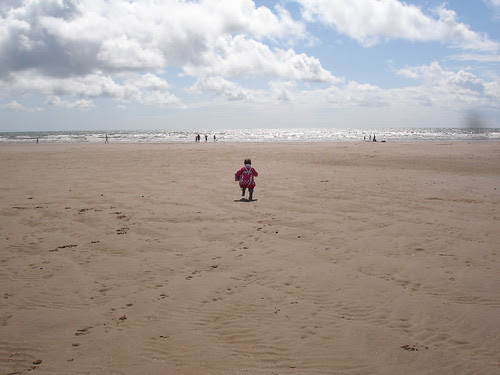 She did come back when she was called, after a fashion.  She had her 'Cool Dude Shades' on for a while.  I love to see her small footprints in the sand. 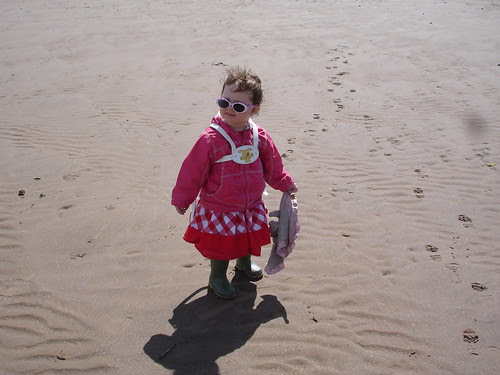 The water was soo much fun.  She did loose her balance and end up sitting in the sea at one point.  She was fearless with it.  She wanted to paddle deeper, even when the waves were going over the top of her wellies.  Mr Snuggles took an impromptu dip as well! 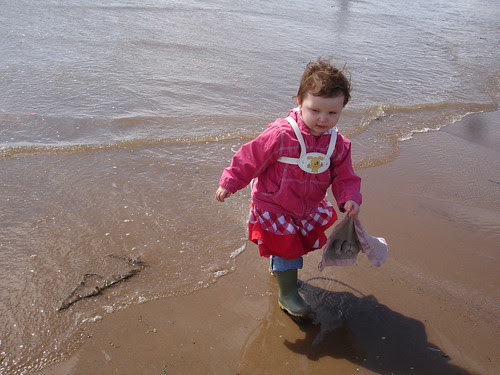 Mary-Jane was excited about all the pebbles at the top of the beach.  She wanted to find one for Daddy that she could put in Mommy's bag. 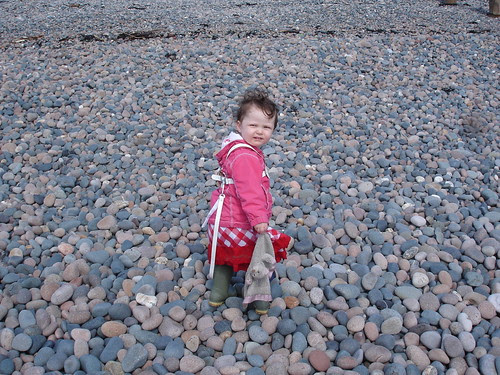 No trip to the beach would be complete without an ice cream!  This is Mary-Jane's very first ice cream cone.  She has only tried small amounts of ice cream, never had a whole one to herself.  She ate it all apart from an inch or so of cone. 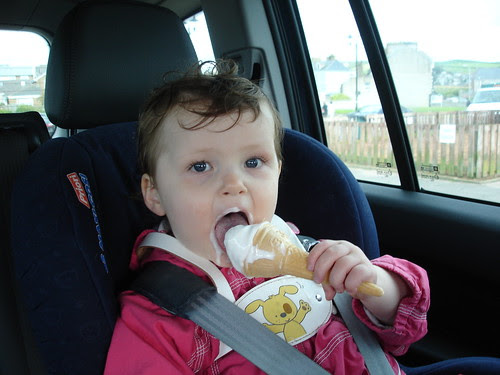 We also went into the Hartleys Cafe.  I had a cream scone and Mary-Jane had a butterfly cake.  I didn't think she would want much tea when we got back, but she scranned all her pasta in record time.  She was a very tired an excited little girl.  I have only heard her slightly murmer once since I put her down.  Good, fresh sea air, lots of running around and excitement has knocked her out - I'm sure it will do the same for me!
Posted by CarpeDyem at 23:15

Sign this girl up for swimming . . . seeing that she loves the water so much. SO many young ones are scared by so much water.

LOVED the 1st fpix of her runninng to the water!

I will get her swimming - it is soemthing that I enjoy doing - when I actually do it. It was lovely to see her running to the sea, she was going as fast as her little legs could take her!