MJ's Teeth, A Giant Pastie And Another Crochet Hat

She is one happy girl x 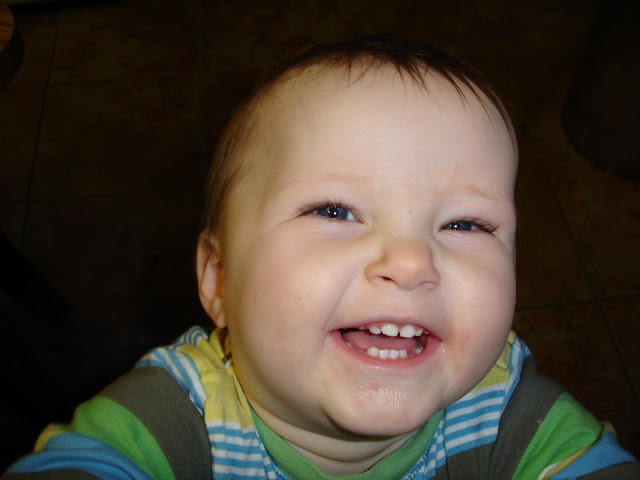 She loves to put her head back and grin.  I love this photo as it shows all her teeth off!  No wonder she had a bad time teething, especially considering they all came through with about two weeks - but she did her best and tried to stay happy throughout.  This picture just makes my heart smile. 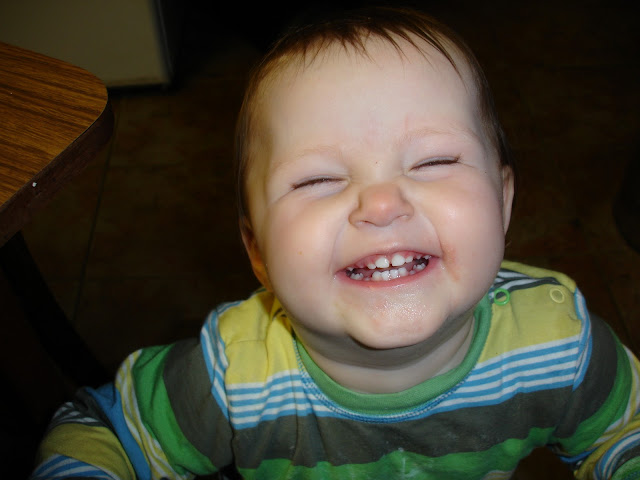 I have had thoughts in my head for a few weeks to get my head around making pies.  I knew if I was successful there would be no turning back.  My first attempt was very successful!  I must admit that I cheated with the pastry and used Jus-rol ready made all butter puff pastry.  It did the job.  I couldn't believe how big it came out! 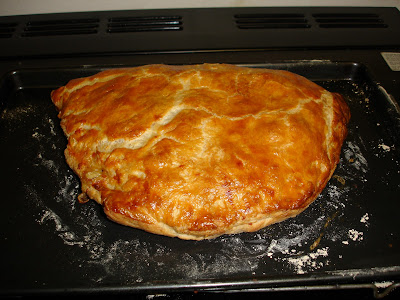 Just to put things into proportion, I put my mug on the baking tray for you to see!  It's the biggest pastie ever! 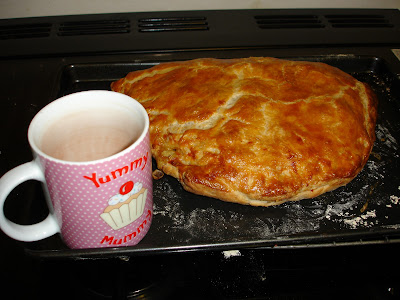 It is a cheese and potato pie.  I used 500g all butter puff pastry, 600g spuds, cut into big chuks and boiled for just under 15 mins, 150g stilton & 150g strong cheddar, two small onions and a pinch of cayenne pepper.  I glazed it with a beaten egg. 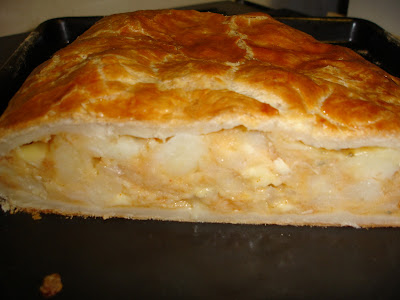 I would quite recommend it.  And it is so versatile, and easy to do.  It will be done again!

I also managed to go Stash Surfing today.  I got out my christmas cottons, ready to start using in a couple of days.  I found the Colinette.  I have two skeins of it, beautiful pinks and black.  It is thicker than what I thought.  It recommends 12mm needles.  I had a quick think - and rummage - as to what else I could use that was a bit chunky and perhaps differed in thickness, so went thick and thin.  Is this slub yarn, I really don't know. 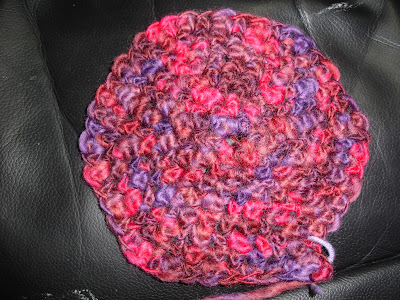 Anyhow, I came across some Debbie Bliss SoHo.  I have had this a while.  I bought it at a show a few years ago at the Birmingham NEC, if memory serves me right.  It is pure wool.  I think I have tried felting with it, but not with the results I wanted.  I started crocheting another hat.  I'm using a 7mm hook.  The ball band recommends 5.5mm needles.  I wanted quite an open texture.  Once is is worn I think it will open out a bit.  I'm using the orignal hat as sizing for the crown and doing it slightly smaller.  What I've done so far has taken no time at all do, and that to a Lazy Knitter is appealing!
Posted by CarpeDyem at 22:11

Labels: A Giant Pastie And Another Crochet Hat, MJ's Teeth

That mug takes me back....all the way to erm, last year!

The Mug lives on! I hope this mug never breaks - Ian got it me for Mothers Day 2010 when I was pregnant.