I was volunteered to decorate our WI's 85th Birthday Cake.  I have never done a cake like this before.  I felt the pressure was on as all the ladies there must have been decorating cakes literally, since before I was born.  I did have a few ideas running through my head about how to do it.  All involved a lot of time and a steady hand.  Mum wanted the logo on the cake, so when we saw our local sugarcraft shop printed edible images, one was ordered.  The rest of the decoration kinds fell in after that.

The first job was to marzipan the cake.  The cake by the way, was made by another member, the ex-president of 15 years, so I really didn't want to mess it up.  There was some marzipan left over, so I had a go at making some roses, as illustrated on the marzipan box.  Simple to do and with a bit of practice could be quite delicate and effective. 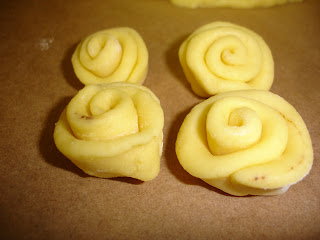 I knew the cake had to be on a flat base, but I coulnd't find one the right size, so I put it on a piece of greasproof paper on the upside of a tray.  By this point I was really pre-occupied but calming as I had done that stage.  I knew for next time things I'd do better or differently.  It had dawned on me at this point (yesterday evening) that I should do a batch of cup cakes as I wouldn't have chance during the day.  So I whipped up 18 almond fairy cakes.  Now at this point I was shattered (I still had my cold) and flopped into a chair.  Mum then pointed out to me that the top of the cake wasn't flat.  It was flat-ish to me, nothing the icing wouldn't hide.  But no, it was the cake that was domed and it was that that needed to be flat. £$%^&&*(!! 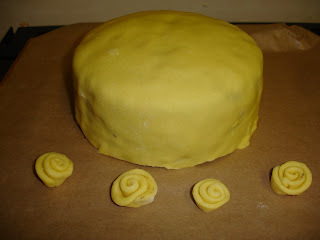 I sliced off the marzipan and took a knife to the top of the cake to get it flat.  Luckily this worked and the marzipan went back on easy enough.  Oh for being tired and not thinking clearly!

This morning I put the icing on.  To say it was my first time, it wasn't too bad at all.  Putting the logo on was a joint effort.  I cut the figures with a cutter.  Next time, the icing for this should be a little thinner, just a little.

As the logo is so bold, I wanted the rest of the decoration to be plain.  I thought even a small amount of decoration would look too much. 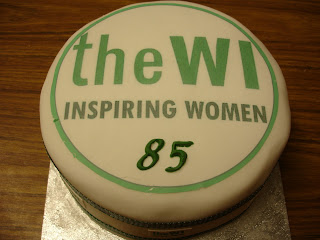 Mum wanted the logo, Beckermet WI and the years put on round the side.  I thought it may be too much.  In the end it looked like this!  Some of the ladies complemented me and said how the plain-ness worked and that they had never quite seen a cake decorated like that before! 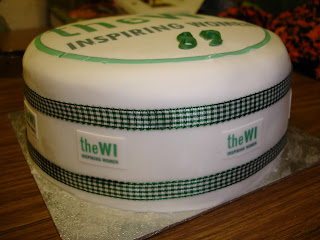 By the time I came to decorate the tops of the cup cakes, I had about lost the will to live.  Most people by here tend to go for the more traditional cakes, so Butterfly cakes it was.  Quick and simple.  And scrummy.  Although I must say, the fuit cake was far tastier! 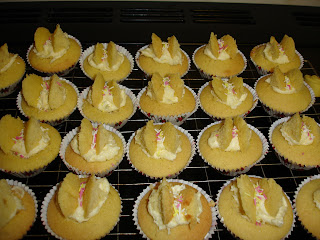 I've more baking to do for next weekend.  It's for a buffet type event following the Rememberance Day Service on Sunday.  I've not decided yet what sort of cupcakes to do (nothing fancy), but the toppings will have poppies on, that bit at least has been decided upon!
Posted by CarpeDyem at 22:54