November Project Knit Day was yesterday.  I had convinced myself that I had got over the worst of my cold and that I was fit enough to be out and about, albeit for a short while.  My voice is on it's way back, althoug not fully yet.  This is quite lucky.  Sometimes my voice can be gone and not fully returned for 3 weeks.  Once it went, came back, then went again a day or two later.  But enough of that.

The knitting group was well attended.  The Project was a Open Rib Cowl.  I'd got mine finished by about 11pm last night.  I'll try and get a picure of me wearing it, it looks better worn.  I might try another one, but only do it half the length and wear it as a head band.  It reminds me to re-look at the Calometry (?sp) head band. 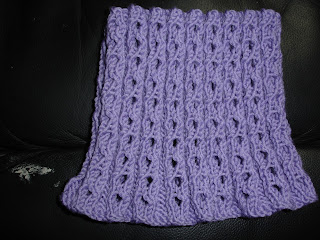 I used James Brett Merino and 5mm needles.  It is very soft and feels warm.  Apparantly we are due snow at the month.  It's based on an 8 row repeat, with only 2 rows out the eight being patterned, as such.

I've got the dates for next years Project Days (along with a diary).  There are also three day long workshops planned - modular knitting and two on Brioche.  Things I haven't tried yet and want to.  I won't say things I can't do, just things I haven't got round to trying and want to!  Oh and there is another Christmas Gifts day.  Positive 'Me' structure to 2012.
Posted by CarpeDyem at 22:38