Mary-Jane Learns To Wash Up For The First Time

Following on from a disturbed night, I decided to keep a tired Mary-Jane as busy as I could today, to hopefully going someway to her - and us - having a better night.  It's in the balance at the moment as I can hear her mooching on her bed - she is either awake or in a very light sleep.  We have had a few highlights today.  HK has been out fishing today, for the first time in months and months.  I am so pleased that he has got out.  Not as pleased as he is though.  It has done him a world of good.  I am eager for him to go out fishing again as soon as possible.

After we got back from dropping HK off at the pools, I kept Mary-Jane free range round the house.  The TV did not go on.  I kept her occupied and entertained.  She sat at the kitchen table whilst Granma ate her toast.  Granma was ably assisted in the toast eating by MJ.  Who in turn was able assisted by Bandit.  When MJ had finally finished her toast, she asked for her hands to be washed.  I pulled her chair up to the sink, stood her up and turned the taps on.

This spontaneous hand washing session turned into Mary-Jane doing her first ever pot washing.  She was stood at the sink for nearly an hour, washing up and playing with the water.  Thouroughly enjoying herself. 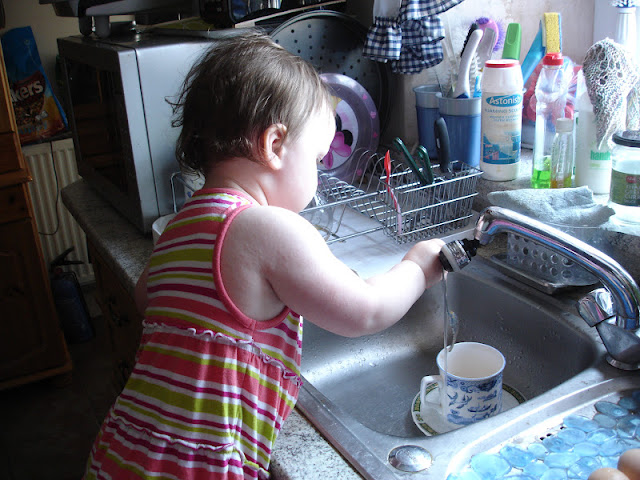 She washed Grandad's breakfast plate and mug a million times over.  She washed my mug and her cup.  I showed her how to put some eggs in the egg box.  This was preciptiated by MJ putting an egg in my mug which was half full of tea.  I'd stopped drinking it as she had tried to wash the cats fork in my tea. 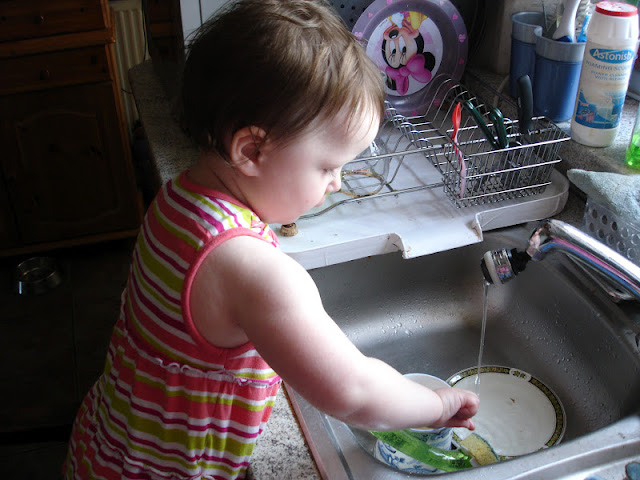 I did get her to swap the cats fork for the washing sponge, I don't know it's proper name. 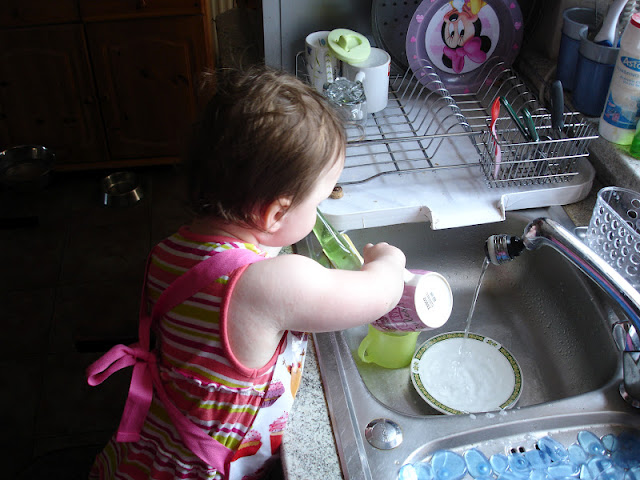 After doing all that washing up, MJ had her lunch, then it was time to go out shopping with Granma.  We went into Whitehaven to Morrisons, Aldi, Iceland and Home & Bargain.  Exciting.  At half three we picked up a happy HK from the fishing pool at Mirehouse.  He has really caught the sun.  I hope he fairs well with being outside in the heat for so long.  Him and hotweather do not mix, and it is not HK that gets the upper hand.

I am so proud of Mary-Jane learning to wash up and ask to wash her hands.  I shall encourage her each day to wash up and be at the sink.  She was pleased as she now has a hook in the kitchen with her apron on.
Posted by CarpeDyem at 22:33

Labels: Mary-Jane Learns To Wash Up