I have had another enjoyable Sugarcraft class this evening.  Despite not doing my homework, I quickly caught up.  What we focused on this evening was doing the outlines of our chosen figures.  These are going to be 3d, so I must do my homework this week, and before the weekend so it is dry for next Tuesday!  I found the piping made my thumb ache after a while, probably because I'm not used to using it this way.  The figure is piped using a 1.5 writing nozzle.  In this instance it can be done using black icing.  Once this is done, the tracer can be taken out from underneath the wax paper. 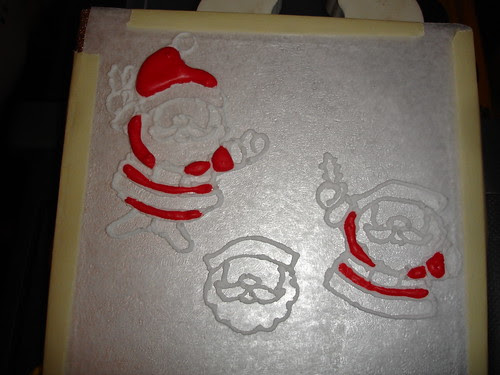 Before icing starts, prepare enough icing bags.  Disposable bags may work better than re-usable, as the hole at the end needs to be quite small and you don't need a nozzle to do the floodwork.  I made mine from greaseproof paper.  After doing the figure, prepare your different coloured icing.  Add the colour before letting the royal icing down. Put the icing in the bags then put the bags in sealed plastic bags until you come to use them.  Then the flooding starts.  You can't do two neighbouring sections at the same time incase they run.  Bigger areas can be done in a circular motion.  A cocktail stick can be used to bring the icing to the corners.  I started off by using too much icing, on the hat.  I suppose like anything, it comes with practice.
I am excited to learn this technique, as it has a lot of potential - you can do any design - and is fun to do.
I'm still undoing the seams of the aran jumper.  I did some today and got on a lot quicker than last night.  HK thinks I am wasting my time as he thinks the yarn won't be much good, he is now re-advised on this matter!
Mary-Jane had a rough night last night.  She was awake and crying a fair few times, though we couldn't quite pin down why she was upset.  Sometimes we can, or at least get a general idea.  During the night I was getting quite a bad head ache and this stayed with me most of the day, It's just a back ground headache at the moment.
We went to playgroup this morning.  Mary-Jane really had fun and enjoyed it.  She has started inter-acting with a few of the other children and passing them toys etc, a first for her.  She usually cuddles in close to me when other children come near her.  I also had her playing with play-doh, the making of this is now going higher up my list of things to do!  MJ also called another child by her name, a follow on from last week.  She is making much progress and I'm proud of her for it.
Posted by CarpeDyem at 22:44