Princess Dress and A Baking Non-Starter

I have finished Mary-Jane's 'Summer Tee'!  I actually finished it at Woodlands yesterday, at the knitting group.  I am pleased with it.  The next one needs tweaking, especially around the neckline, to make it smaller, so it can be worn on it's own when it is warmer.  Mary-Jane was thrilled to bits with it when I showed it to her.  Her little face lit up and she called it 'my princess dress'.  She then began pulling at the dress she had on, so she could put her new princess dress on.  It definitely needs a t shirt underneath it.  And as she is thrilled with it, then I am doubly thrilled. 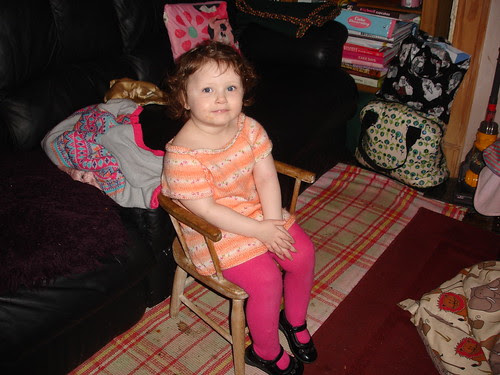 The Princess Dress.  It has so much potential.  And it takes no time at all to do. 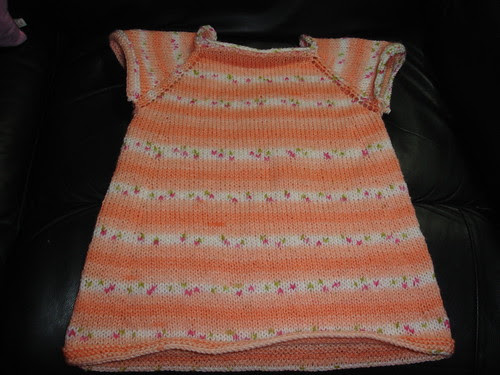 My princess in her princess dress today, with Daddy's shoes.  The hem rolls up somewhat, that is another thing I want to work on for next time.  Still, it looks good, she looks good in it and she likes to wear it.  Happy Happy Happy! 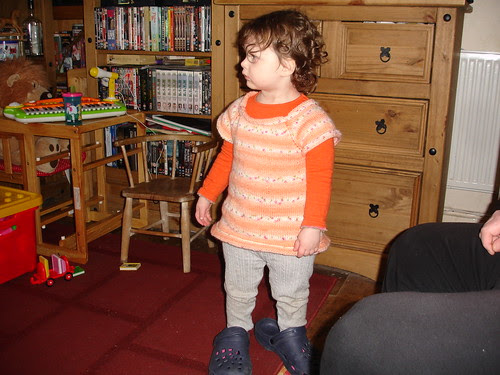 I have now cast on a 22.5 degrees shawl for her.  It is designed by Martina Behm and the pattern can be found free on Ravelry.  I am using James C Brett Moonlight Sonata, in greens.  It's coming together nicely at the moment, and the stitch count is increasing.  It's a v shaped scarf/shawl.  One stitch is cast on either end of every row and there are two yarn overs either side of the centre stitch every third row.  There is a scalloped edging.  I think I have my head around how to do it, it's a new edging stitch to me.  There will be plenty yarn left over, so I may make myself one, or something similar.  It is a 100g ball, with 500m in double knit.
Last night was WI comittee night.  When I got back, I did feel drained, and had an early night.  It was the firt night in a while that Mary-Jane actually slept through.  She did have a few cries in her sleep, but nothing that warrented us going in to us.  Fingers crossed she is breaking this cycle of screaming for us when she wakes in the night.
Tomorrow night is WI Main Meeting (as I call it).  I hope I shall not be as drained.  I even had a nap this afternoon, on the sofa.  MJ got my lap blanket and put it over me.  I was going to bake this afternoon - and use my new tin with the hidden heart.  I was missing a few tactical ingredients, soured cream, chocolate and icing sugar.  If Tesco wasn't so far away, I would have nipped out and got the stuff.  There is the Co-op but I would be paying top dollar for items.  I quitely had my bottom lip out.  And I was kicking myself, as I was walking around Tesco this morning (HK had an appointment in Whitehaven, so MJ and I had a wander around Tesco to kill time) I thought about getting two of the three things at least, but decided against it as I didn't want to buy without specific reason.  I am trying to use and run down a lot of my baking things, so that I can build up with fresh.  So flippin typical that the cake, filling and topping I decided to do today, contains the things that I decided not to buy.  So yes, I did sulk somewhat to myself!  I thought about baking some biscuits, but by that point, I just thought 'Nah, not today'.
Posted by CarpeDyem at 22:10

What a great dress! And so great that MJ loves it too. A win-win!

A dumb USian question. Can you buy soured milk? I have never seen it for sale here. Sour cream, definitely. I've seen a few recipes that originally called for soured milk "modernized" with the addition of vinegar or a bit of sour cream to give it a tangy flavor.

I did mean sour cream - sorry, my mistake!

LOVE the Princess Dress! The stripes are just adorable.