I've yesterday and today to catch up with.  Last night was Sugarcraft Class, Week 3.  We did large and small leaves, using the Virginia Creeper Leaf Cutter, and a leaf veiner.  We had to do 12 large and 6 small.  As well as this, we wex re shown how to do the throats for the orchids.  My home work is maybe 6 or so large leaves and all my orchid throats. I think there are six of those.  They fix on the pieces that look a bit like spoons.  I am much more relaxed than last year, though not as relaxed as I would like to be!  My confidence is growing slowly, it would grow more with practice. 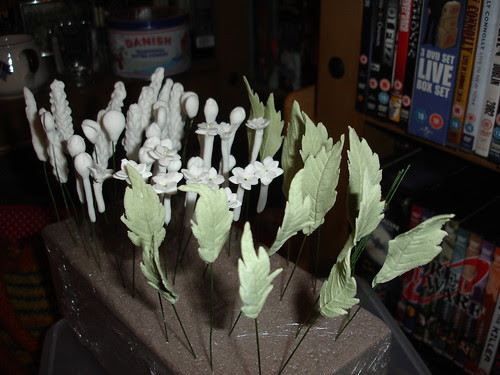 Whilst we are on a sugary subject, this evening I attended the West Cumbria Sugarcraft Guild Meeting.  Again very interesting.  I have learned so much.  The demonstrations were by members.  The main one was quilling.  Quilling as in the same as paper quilling, but with flowerpaste.  Very impressive I must say.  It looked simple to do, and maybe time consuming to build a big picture up.  I am inspired to have a go.  We were shown how to make a duck, a fish and a cluster of bullrushes.  The other demonstration was covering a cake in regal icing (or was that royal? icing), along with hints and tips.  I was also personally shown how to hold and use an icing bag.  On the small amount I tried, I could see an improvement.  It's all in the technique, and practice of course.

Back to yesterday (although I am starting to wonder if it was the day before, days roll into one at the moment).  We had a lot of heavy rain, no surprise there.  But amongst all the heavy rain, there was sunshine, so there was rainbows.  A beautiful double rainbow.  I grabbed the camera to go outside.  I had the thought to take a good picture of the rainbow and take it to the farm opposite.  The end of the rainbow was right on their house.  I got to the back door and it was absolutely hoofing it down.  I retreated.  HK was brave enough to go out and he took the pictures.  He is good to me! 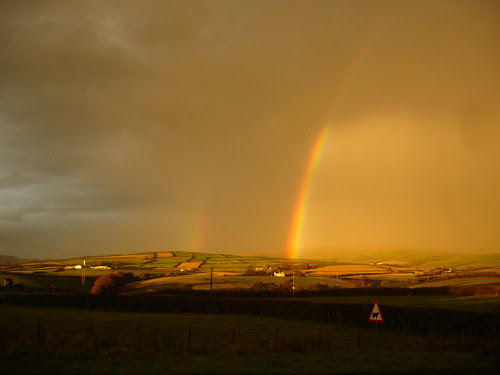 They have a tutorial on an adorable was to present cupcakes.

I shall take a look thanks!

That looks awesome! It is well worth having a go at and developing - lots of ideas are stating to whizz round my head! Thank you for the link!