Roll of drums....... I have baked today!  A spicy cinnamon apple bundt.  It is the first time (that I can remember) using a proper bundt tin.  I have used a silicone one with disasterous results when it came to turning out.  This one about flew out of the pan.  It has a warm spicy taste to it.  I need to tweak the baking time to suit the size of the tin and the oven, for next time.  It's on my Make Again List.  Try it out for yourself! 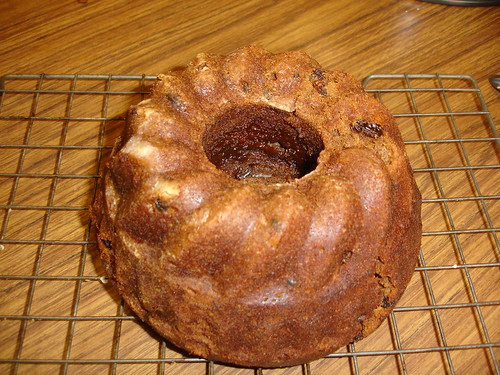 250g plain (all purpose) flour
1 tsp bicarb soda
1 tsp ground cinnamon
1/2 - 1 tsp allspice
1/2 tsp salt
200g caster sugar
100g butter
350g apple sauce/puree
2 tbsp treacle
150g sultanas
Notes
I used a teaspoon of allspice and found that, as nice as it was, it over powered the cinnamon.  You could try just cinnamon, or use ground cloves instead of the allspice.  Have a play.

I could have done with turning the temp down by 10 or maybe 20 degrees c and keeping in for another five minutes or so.  Knowing your oven is always good!

I suppose a different cake pan could be used, baking times may need to be adjusted