At last, some pictures of the Grace Beret.  I don't know if the centre is supposed to sit like this, I thought it would have been flatter.  It looks okay and is quite warm to wear.  HK took the pictures this morning. 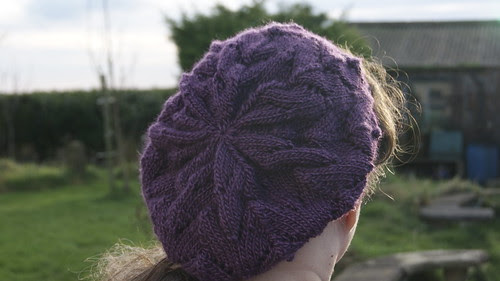 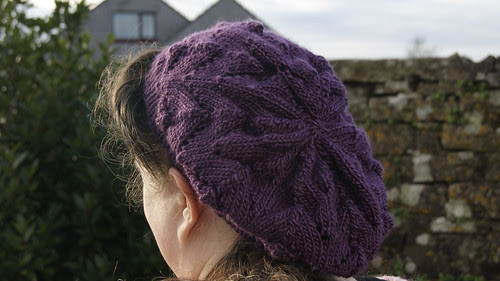 I have frogged the Gull Baby Blanket.  I had done enough to measure the width and I was way way out with my calculations - by at least 13".  The blankie was 39" instead of 26".  I really don't know what I was thinking about when deciding the stitch numbers.  The pattern said 123 on 5mm, so what ever posessed me to do 193 on 3.5mm, I really don't know.  I now have 137 stitches, which shold bring it out at around 27".  I have one more row of the border to do now before the main lavce pattern starts.  At least the rows are nearly 1/3 shorter.  Should get it done quicker.
I still want to do the cardi jacket in this months yarnwise.  And I want to do it in one colour, not in stripes.  I am sourcing yarn, and alternative yarns.
MJ and I were due to go to Penrith today, to have a look around the shops.  I took the last minute decision not to go as I thought it might get too cold for MJ.  It was due to be sunny but cold - 2-4c (I think that is about 37f).  Instead we had a very relaxing morning in the house, just the three of us.  HK cleaned the chickens out.  Mary-Jane and I played in the kitchen and had lots of fun.  The three of us managed to sit at the kitchen table together to eat lunch.  I cannot remember the last time we did that, or were able to do that.  It was more than pleasant, I must say.
Mary-Jane didn't have the best of nights.  She woke up crying twice, where we had to go into her.  But she had a lie in in the morning!  I didn't wake up until a quarter to eight! Now that is something else I have not done for a while, and no raging headache (just a dull one that went on it's own).
Posted by CarpeDyem at 22:02

oooh, I like the hat. My very favorite style (kind of loose, worn on back of head) and a lovely color too!

Have you blocked it? If not, the crown may lie smoother after blocking.