At Knitting yesterday, Jo was sporting a rather gorgeous Shoulder Shawl that she had made using Noro Silk Garden Chunky. I viewed it very much with Green Eyes, you knitters will know exactly what I mean - you see, you want, you stash surf, you knit!

Once home I found the pattern - it's on Ravelry - and wrote it down. I dug out some James Brett 'Marble' Chunky, the nearest thing I had to Noro, well colourwise anyway. It said on the pattern to use 10mm needles. The ball band said 6mm, so I compromised and used 8mm (straights then circulars). Jo's looked fairly loose, so I thought that seemed an okay size to use. 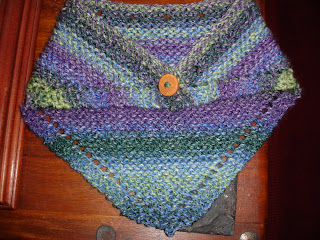 I cast on like one possessed and off I went for an hour or two. I picked it up again this morning, put the idiot box on and off I went, thinking I would not stop until I finished. 'Ghost Hunters' and half of 'Most Haunted' whooshed by. I was getting restless and tired. The shawl seemed an okay size to cast off. I can remember Jo saying something about 16" or you could do it longer. Mine measured 27" along the neck side. Where oh where did the 16" come from? Never mind. With the end in sight, I cast off.

I promptly posted on Ravelry. I then thought I would revisit the original pattern - I had written it down instead of printing it. This 16" was playing on my mind a little. My shoulder shawl sat a little up my neck and Jo's had not. Hhhmmph. 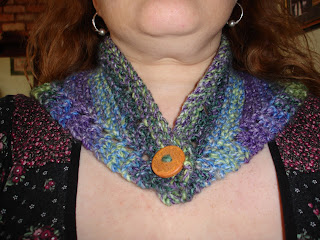 Then all became clear. The 16" was the measurement from the centre of the neck edge down to the point. Mine is only 12". Theme and variation. And a moral or two in there. Write the whole pattern down, especially when it's a simple one. Read the whole pattern before you start. Especially the simple ones. Tsk Tsk! On the upside that pattern does lend itself to theme and variation, whether you mean to or not!!
I like it anyway - it'll be good when I'm sat in a draft, with my hair up or when I'm driving!!
Posted by CarpeDyem at 12:30