Sunday saw us go out for a walk. HK suggested that we go to Whitehaven Harbour and have another look around. Apparantly there is a walk above or along the left side of the harbour. So this is where we headed. I shall start mentioning at this point how cold it was. Flipping cold. The car temp said 3 degrees. It was the coldest 3 degrees I have ever experienced.

HK surveying the harbour at the start of the walk. The sea looks cold and dark. It was. Not quite as black as Wasdale. I certainly wouldn't want to take a dip in it. Not on your nelly! 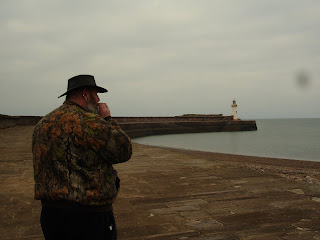 Part of the shore of the harbour. At this point I was regretting not wearing my scarf. 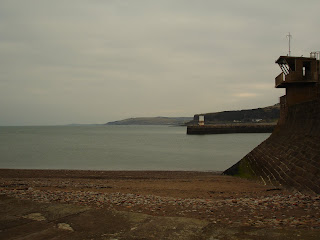 Stood in the same place (nearly) as above, but looking in a different direction. Now I was wishing I was wearing a big wooly hat. 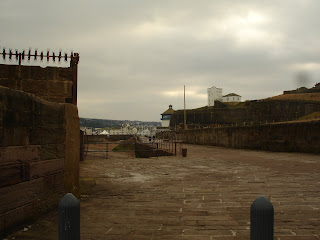 A bit further along. My chin was getting numb. It was as cold as it looks! 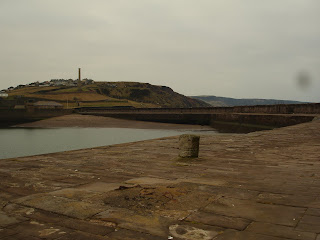 At the end of the harbour wall, you can climb up the steps and get to the very top of the harbour wall. People fish from here. Even on cold days. Nutters in my opinion. I don't care how much they like to fish or how wrapped up they are. Nutters! I thought I'd go to the top of the wall and get some good photos. 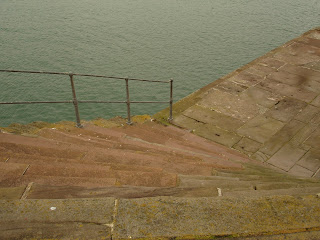 By the time I got to the top of the steps, I chickened out of going any further. I was proud of chickening out. Besides, I don't think my knees would have carried me much further as they were rapidly turning to jelly, a sure fire sign that they feel unsafe. And if my knees feel unsafe, I feel unsafe. Simples.
So this is the top of the harbour wall. I will walk along it one day. But not when my whole face is going numb with cold and my knees are like jelly. 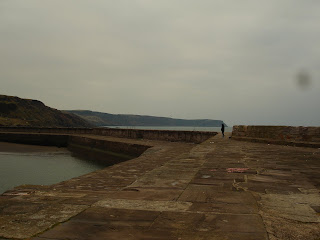 HK doing the sensible thing with MJ and sheltering inside the harbour wall. 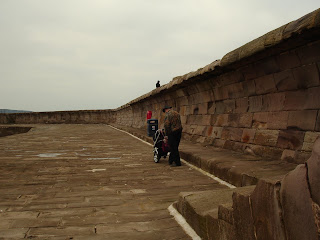 We returned back to terra firma post haste. Even HK said he was cold, so it must have been. I was glad that Mary-Jane was very well bundled up. Needless to say we went straight back to Ellercroft. I still hadn't thawed out by then, but a mug or two of tea did the trick. Plus lots of cuddles from Mary-Jane. And HK.
In fairness, Whitehaven and it's harbour have seen a lot of history. Did you know, in the 1770's it was the last failed place of invasion of mainland England? (Hitler didn't make it to the Mainland). This invasion attempt was led by John Paul Jones, who was originally from Kirkbean, Dumfries, and did his apprenticeship in Whitehaven. His first voyage was made to America, the country of his after adoption.
John Paul Jones led the attempted invasion on 22nd October, 1778. I'll not go into the ins and outs of the invasion. Loose talk has it that the main reason it failed was that Jones's men were in the main local men to Whitehaven and area, so when they landed they ended up going for a drink with old friends. I'm sure it didn't quite happen as simple as that, but......contrary winds have a play in it somewhere as well......
Between his death, at age 45, and 1913, Jones was buried in an ?unmarked grave in Paris. In 1913, his remains were removed to the crypt in the US Naval Academy at Annapolis.
Posted by CarpeDyem at 22:32

WOW! You live in a place of history . . be it funny if they actually did sit down together and get drunk.

When the British were at Fort George in Canada and the Colonists were in Fort Niagara (both located at wher the Niagara River and lake Ontario meet . . opposite sides) . . . the Colonists had been over in Canada having supper with their British friends..

When word arrived that war had been declared, they fnished their meal, enjoyed the drinks that came after and the colonists rowed their boats back to Fort Niagara

The next day, they started battle.

There does appear to be a lot of history in this neck of the woods. Lots for me to find out.

Your tale of strangeness to fight friends, reminds me of the Football game played in no-mans land on Christmas Day 1914, between the british and the germans. Very poignant and sad.

Not John Paul Jones from Led Zeppelin then!?!