So, What Happened To The Chooks?

By the time we came to move, we were sadly down to only two chooks - Sunday and Roast. Radar took poorly and died in the autumn. In Spring, one of the Modern Game over strained when laying and had to be killed. The other Modern Game, appeared to pine for her and kind of slowly went down hill after that, over a couple of months.

On New Years Eve, Sunday and Roast got boxed up, packed in the car and headed north. After a few days, Roast disappeared. We are not sure whether a rat got into the hen house at night, although there was no physical evidence of this, or whether she made a bid for freedom, I don't know. I keep still half expect to see her in the garden as if nothing at all has happened.

Sunday has taken a good week or more to settle in. She is not quite the bottom of the pecking order, but it must be a fall from grace for her. However, she is seeming to get more settled in her new home. She has sussed out that the compound is bigger for her.... and that there is a huge garden beyond that in which she can roam and peck all day.

This is Sunday on the far side of the compound, thinking she is living the high chook life! 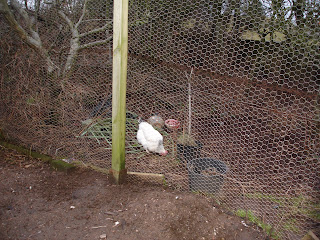 Sunday has 8 new sisters in her new flock. Here are two. I don't think they have names. 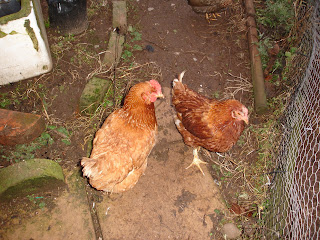 Here are a few more. You can just see Sunday - the white thing - on the upper left. 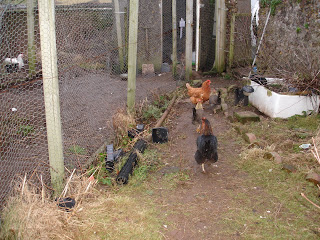 As with all posts of chooks, Rhinog must get a mention! Rhinog has been having lots of fun since he moved. Not only has he a huge garden to play and run round in, he has House Fairies (cats that live in the house and are not allowed out) to play with and watch their every move. He and the cats are getting used to each other. Rhinog is being good with them, at worst all he does is try to follow a selected cat around the house. Oh and pinch their supper when he thinks they have finished and no-one else is watching. It's very tiring business!
Here Rhinog is, surveying his new garden, and his new feathered friends. 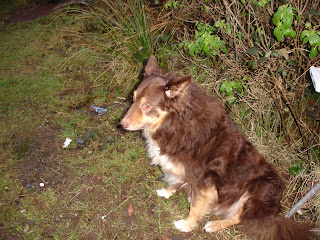 Rhinog and his human Grandad are in the process of adopting each other. They both happily take each other for a walk each day and come back pooped. It must be fun as Rhinogs paws and tummy get dirtier and muddier after each walk.........

Indy says it is about time she got to see a picture of her long-lost friend.

I am so sorry to hear about the chooks . . but glad that Sunday is doing well.

I can't believe Roast has gone. I will look out for her in Stafford!