A Short Walk Along Nursery Road Today was a lovely clear, crisp day.  I was getting cabin fever and wanted to get out.  The last few days I have been putting up with ('suffering' sounds too melodramatic) with one of my 'cold-nearly flu, might be a chest infection on it's way, but definitely bloody laryngitis'!  If you know me, you'll know what I mean!  I've not had this lurgy since March '10.  Or did I have it last November, I can't remember?  For quite a few years I've been getting it twice a year, but not this March, luckily, for some reason.  And it's been worse since I was involved in the fire at work, thankfully I think most of the damage has healed from that incident.  But it's back and I've had enough of it already.  So, with a little bit of energy about me, I wanted to get out and go for a walk.  Just a short one, I didn't want to over do it - a thing that is difficult to judge when I'm like this.

Oh and as I'm still sussing out this new blogger interface, the photo's are in reverse order - with the old interface, I had to upload them like that.  Live and learn.

So our walk in reverse.  These friendly cows you have seen before, in the spring.  HK and I have fed them grass in the evening.  They were very interested in us walking past and without prompting they came up to us for a closer look.  We had all gone out - myself, HK, Mary-Jane and Rhinog.  The cows belong to the farmer next door but one to us.  Mary-Jane wasn't quite sure what to make of them. 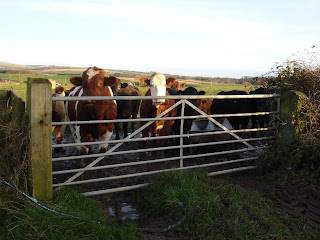 A close up of brambles in thistles 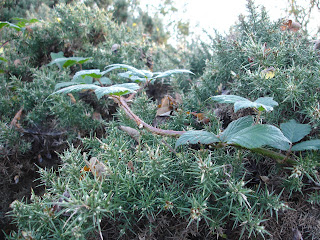 The colours of the trees, for those which haven't shed their leaves already, is quite magnificent.  This doesn't quite do it justice but the blueness of the sky is a lovely backdrop. 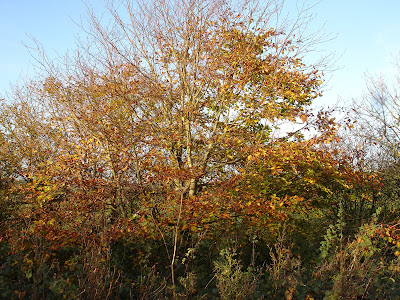 Looking into Nursery Woods.  The light play amongst the tress was stunning 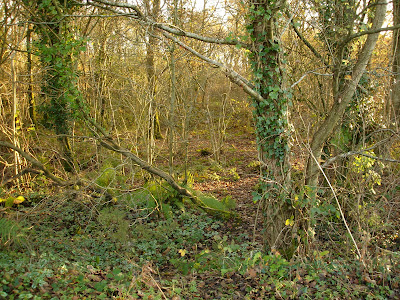 Nursery Road heading towards Beckermet.  Around this bend is my bench, which I used often in the first few months we were here.  Unfortunately the bench has come a-cropper.  There is no longer slats to sit on and the left side seat upper is in a state of collapse.  I don't know if it will be mended.  I hope so. 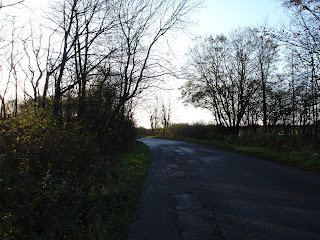 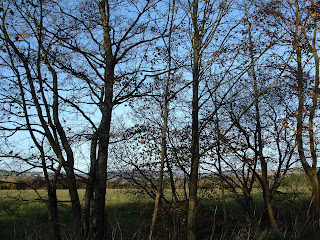 Mary-Jane, not particularly enjoying this part of the walk.  In fairness, on the way there, we were walking in to a bright, low winter sun.  MJ was much happier on the way back, after this photo was taken.  Plus I think she was wanting a pick-up and the wheels on the buggy had stopped going round....... 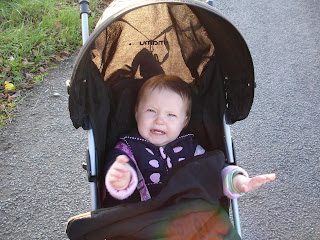 I have found a couple of mitten patterns for MJ.  I know they won't take long to do.  The will definitely have string attached to them both, in time honoured tradition! Yesterday I cast on a skirt for her, in a purple 4 ply.  It's a swooshy one - over 220 stitches on the front hemline alone.

The lesser spotted HK and Rhinog, walking ahead of us. 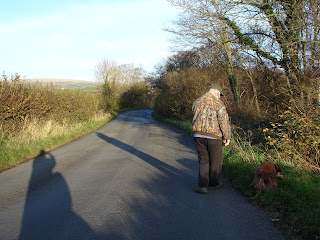 I really ought to try and go for a walk on the better weather days.  I forgot how much I enjoyed them and how relaxing they were.
Posted by CarpeDyem at 22:17