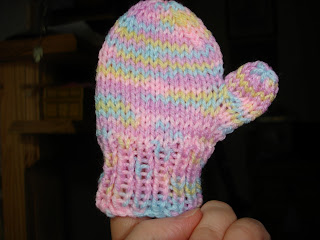 As the weather is turning into winter, my thoughts are truning just as quickly to woolies for Mary-Jane.  My head is full of things I want to knit for her.  Today I have found some trouser/leggins/pants patterns for her.  I would like to make at least one pair for her.  I want to make a few cardi's for her as well.  One I would like to do is the Elizabeth Zimmerman Baby Surprise jacket.  I have made several of these and rather like the pattern (a lot!).  Now MJ is of an age where I think a little bit of maths might be involved to make the jacket her size.  Perhaps when I next have my clear 'numbers' head on - it does happen sometimes!

I took a break from knitting the Lush skirt - I have now past the lovely row of k2tog and am half way to the next row of k2tog - and am making a pair of mittens.  I have completed one and have done the first round of the second.  I will post a link to the pattern, I got it from Ravelry.  It's done on DPN's so no sewing the seams together.

Mary-Jane does not seem to be any worse today with the cold I may have passed on to her.  In fact she seems a bit better than yesterday.  Hurrah for the calpol, if that is what did the trick.  Here is a close up! 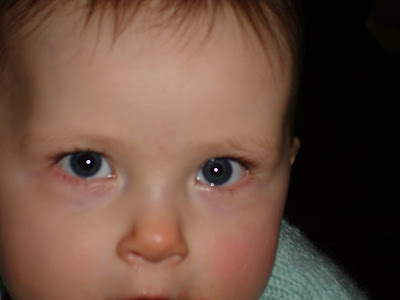 Mary-Jane found an empty box in the kitchen and was given a couple of food bag clips to play with.  It kept her occupied for quite a while.  She rattled them around, took them out one by one, put them on the side and put them back in the box one by one.  Lots of fun! 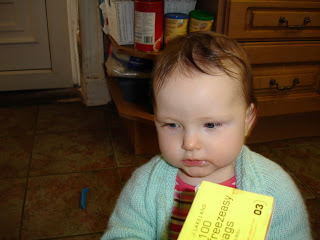 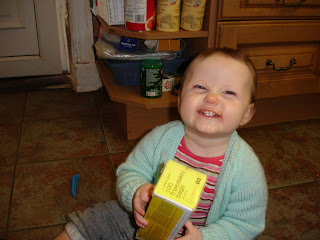 I feel a bit better in myself, although it is very much a case of the mind is (nearly) willing but the body says &*^%$.  I'm still maxed up on paracetamol.  My voice is still awol.  I didn't go to the NFU meeting tonight and am seriously thinking of not going to Sugarcraft tomorrow night.  Thursday I have a Project Knitting Day (morning) and I don't want to miss out on that, so fingers, toes and knitting needles crossed that I'm fit enough for that.

Which leads me to think about carrots and potatoes.  Last time I went to Fobbles last thursday, to collect my Knit Magazine, I got some tatties and carrots.  I had some carrots for my tea last night and tonight and the tatties we had tonight.  Well, very nice they were.  I shall get some more when I go again.  I might even make enquiries if there are any local farm shops where I can get fruit and veg.

I've continued to trawl through the hairy bikers Simply Pies book and continue to be inspired to make pies.  I now have two lists - one of pies I'd like to make and the other is my weekly shopping list, with things on to make at least two pies.  I shall do a third list for sweet pies.  Told you my head is trying to whirr but my body ain't - at the moment anyway!
Posted by CarpeDyem at 22:42