Mary-Jane, M and I went to Calder Bridge Church Autumn Fair this afternoon.  Mary-Jane thoroughly enjoyed herself.  Not long after we arrived, I took her out of her buggy and carried her until she felt confident amongst the people.  Needless to say this didn't take long - perhaps ten of fifteen minutes, then she was wanting down and walkabouts.  Once people started moving towards the dining area, I found a corner at the end of the dining tables.  Afternoon tea is a highlight of the fair.  At first MJ didn't not venture far out of this corner, just to the edge of the people.  She sat at the table and had two quarters of ham sandwich and two quarters of salmon sandwich.  She devoured the salmon - she may just have salmon for her lunch tomorrow!  The she had part of my chocolate biscuit and a couple of bites of scone and rum butter.  Then it was time to roam.

Mary-Jane was toddling up and down the length of the village hall and round and round the row of chairs in the middle of the room as if she was playing musical chairs.  She found a large mirro, propped up on the floor and was fascinated by it and the baby she could see.  This baby she was chattering away to, waving and dancing to.  Not to mention giving her her best dazzling smile!  Best of all the Baby she was playing with was smiling, dancing and waving back to her!  Many folk commented on how happy and full of smiles she was.

I did take my camera, but didn't take any pictures.  I think the only pictures would have been of my heiney chasing Mary-Jane about the place.  She must have been toddling non-stop for an hour and a half!

Now, when I told you about my crochet escapades on Monday, did I mention that LA had crocheted some items including a reindeer and a penguin?  Well, I was very lucky enough to get my mitts on them!  Here is Rudolf The Reindeer!  MJ was pleased with him.  I waved to LA across the village hall with him in my hands - and got a double thumbs up from LA!  Another lady, S, said I could have the pattern if I wanted - I might just have to take her up on the offer. 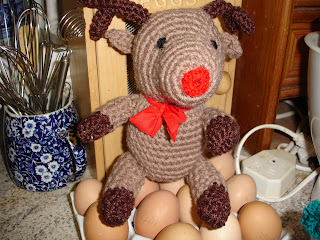 Here is the little penguin.  I bought him mainly for HK has he likes penguins.  Mary-Jane thought the gold pompom on the top of his hat was mighty tasty......  With my new found crochet confidence, I think I can make theses two chaps.  LA has every confidence that I can. 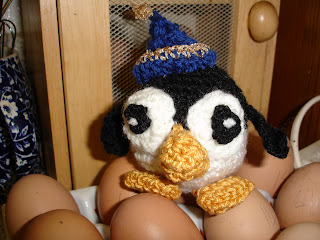 I also saw this snowman and just had to get it as well.  It looks vaguely familiar and all I can think of is Alan Dart in a Simply Knitting Magazine. 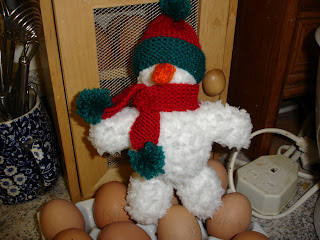 My Christmas knitting is not underway yet.  I'm starting to think that I may not get much done.  There is time yet