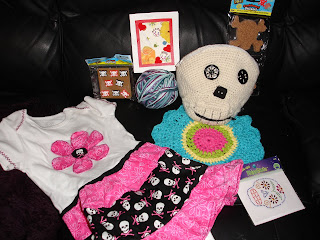 My July Itsy Bitsy Swap Sender was Lizavietta. She had been very busy crafting and crocheting for me, Mary-Jane and HK. Liz made me a beautiful kerchief in heather colours. HK had a crocheted skull, with zips in the mouth and the top of the skull. He now has it on his side of the bed, with sweeties in. Mary-Jane had a pretty dress with skulls in the skirt. Liz also sent me some skull pins, some cork skulls and an iron on transfer of a candy skull. As well as some rather gorgeous Peaches & Creme cotton. I was spoiled!
So here I am, with my kerchief - I've wanted one of these for a few years, it was one of those things that I have never got to making, so I was thrilled when I recieved it. 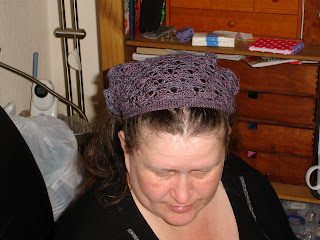 HK's new skull! I saw a picture that Liz had previously made and Liz was good and kind enough to make me one. I think it's as cute as anything! 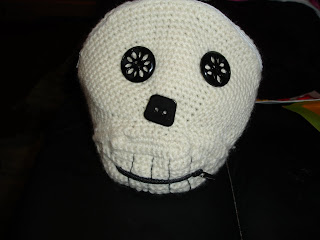 Here is MJ in her posh new dress. Liz has made this and I think it is, to coin an american phrase - awesome! It fits MJ really well and I think it's fab. It suits MJ! 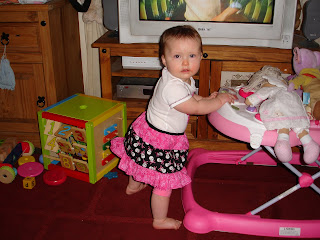 Mommy and MJ. It's the only picture we could get of her from the front. The top of the dress has a flower and a skull in the middle of it. Wowsers. 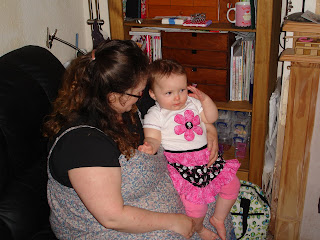 Not many little ones could carry off skulls on their clothing but MJ does it well.

That Lizavietta is one talented person.

Lizavietta is certainly talented, no doooubt about that! I shall have to take a leaf out of her book with the dress for MJ.