Gosforth is a beautiful village three miles down the road from the house.  Gosforth, like many other villages and areas around here is rich in Viking History.  We will go on a journey from Eskdale to St Bees and re-discover the Viking Trail.  Most of the history that I know to, is found in churches.  I have a 'thing' for old churches anyway, so this adds another exciting element for me.  It amazes me that so much history is on my doorstep.  I am eager to learn and to share.

I have not been church spotting for quite a while, life hasn't really led me to it.  So my knowledge of church buildings, names of things etc is more than rusty.

This is St Mary's Church in Gosforth.  I find it unusual for a church to have three bells.  I know three is a 'magic' number, and is heavily used in christianity - the holy trinity etc.  There is an inscription above and below the clock, I can't quite make it out in the picture.  No doubt I shall be there again - after all the entrance to Mary-Jane's playgroup is just left of the photo, by a few feet.  Talk about things being under my nose. 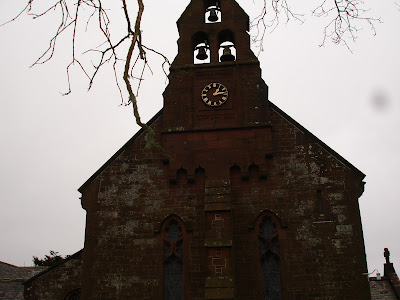 This cross is viking.  It is generally regarded as being one of Britains most important viking treasures and certainly amongst it's finest.  It towers over the churchyard to a height of 4 and a half meters from a circular base, representing the sacred ash tree, Yggdrasil, that supports the entire universe.  The carvings on all four faces of the column illustrate the epic poem Sybil's Prophecy, where the poet, anticipating the supremacy of christianity, seeks to explain the gospel by using figures of Norse mythology. 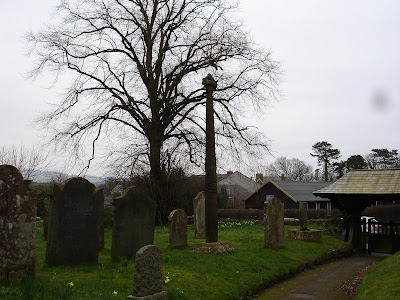 The entrance porchway.  I've still to find out about these pieces. 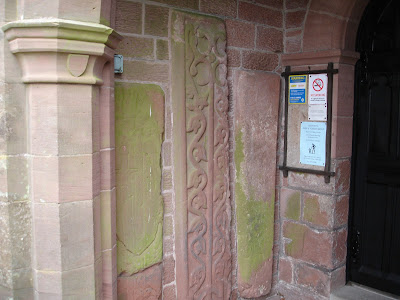 During the rebuilding of the nave in 1896, two large carved stones were found, forming part of the foundation of the Norman north wall.  They were identified by Dr Chris Parker as being Norse Hogsback tombs dating from no later than the beginning of the 11th century.  Not only are such tombstones extremely rare, but the examples here are nearly perfect.  The form of a hogsback tomb is taken from early nordic houses with their cruck timber frames.  They are quite literally 'houses of the dead' 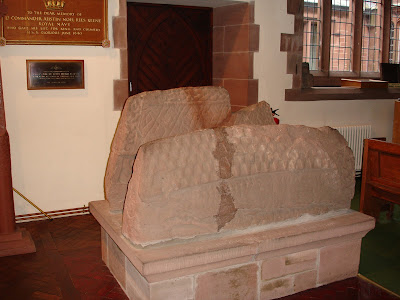 Okay, not a  viking relic, but a thing of interest.  I need to recheck my notes on this.  It came from Japan during the second world war.  More later 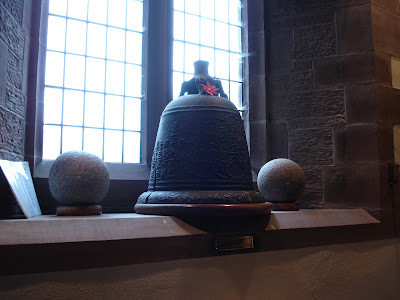 This is another peice that caught my eye, of which I know nothing, at the moment.  Our trip to Gosforth and Irton was very brief.  The windows that you look onto, is the room where Mary-Jane and I go to playgroup. 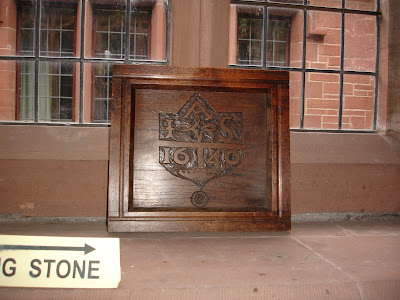 There was beleived to be four vivking crosses in the churchyard.  These are mre remnants, built into the church.  I think One of them is known as The Fishing Stone, I know the history to it, but am not sure if it's the right picture, I'm certain, but want to verify. 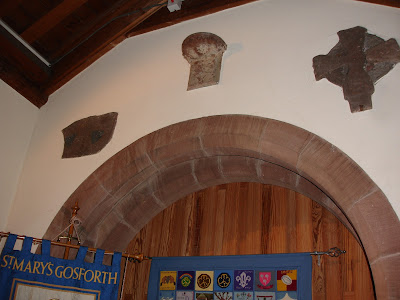 I have some more pictures, but blogger was having a hissy fit and not letting me upload them.  In the bottom of the above picture is the Millenium Tapestry.  This is noteworthy, but when I can show you a photo of the whole thing!
Posted by CarpeDyem at 23:31