St Johns Church in Beckermet is the only church on this trail that does not have an ancient cross still standing in the churchyard.  Every window ledge inside the church on the north side of the nave has either one or two beautifully carved fragments from Norse Cross shafts, while the sills on the south side are brimful of ornate grave slabs dating from the 13th century.  Although the present church was built in 1878 there is good reason to believe that the site was used as a monastic cell as early as the 7th century.

This church is well within walking distance, a mile if that. 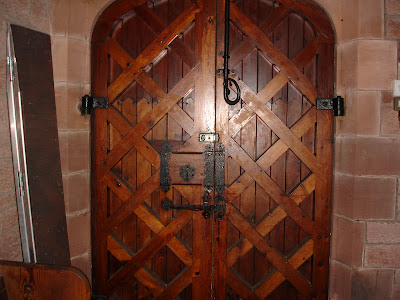 The first two Norse cross pieces can be seen in the porch. 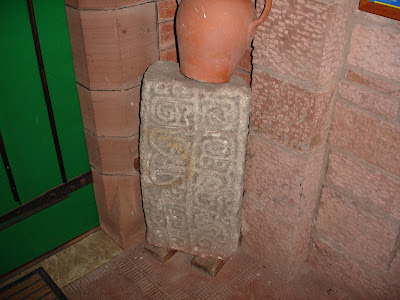 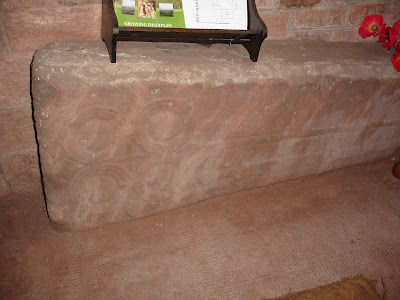 I need to find out more about this church - I could say that about all the churches.  Next time I shall also take a note book as well - lots of things to read in these places! 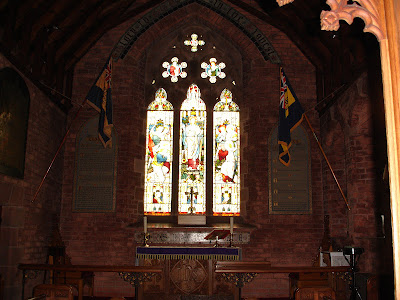 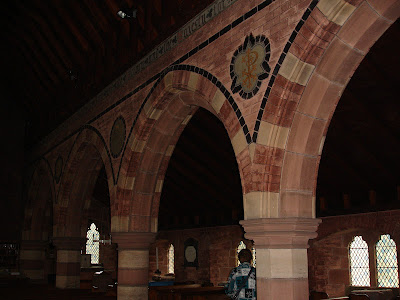 The view from the nave (front of the church to the back). 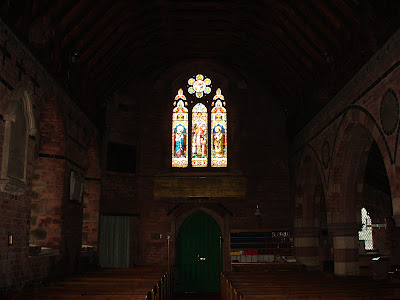 The arches are rather beautiful.  I want to get the whole inscription above the arches.  The greens are very vibrant.  I need to find out more. 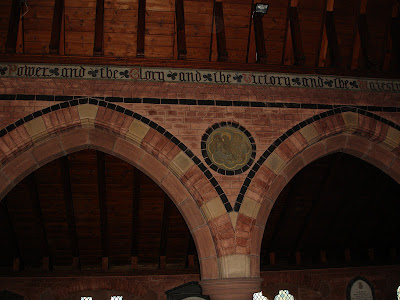 One of the stones on the north side.  Another thing I need to do is to use my 'posh camera' more, the carvings are a 'Must See'. 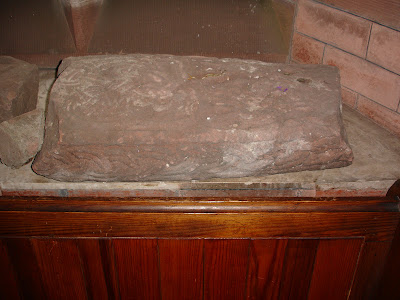 Here is an ironic thing.  I visited the church with Mary-Jane and Auntie AnnInAmerica.  We didn't have lots of time, but enough to have a look around.  I kept Mary Jane in her buggy.  We walked around the churchyard first, then in the church, then a few hundred yards up the road, before returning to the car.  Once back at the car and Mary-Jane was strapped in, I realised that Mr Snuggles was once more Missing In Action.  I asked Auntie AnnInAmerica to watch Mary-Jane whilst I felw back and tracked our steps.  I thought I'd initially go to the furthest point where we walked and come back.  As I passed the church, I had a really strong feeling that Mr Snuggles was in there.  I ignored my gut feelings and carried on up the road, just in case.  He wasn't there.  I then went into the church and lo and behold, there was Mr Snuggles, lying in the aisle, next to the front pew.  I picked him up, said lots of out loud thank yous and headed back to the car, where Mary-Jane was now quite distraught as she had seen me go off and leave her.

When I down loaded the photos, I actually had taken a picture of Mr Snuggles, lying where I found him. I'd not noticed him when I took the picture.  Weird eh?!
Posted by CarpeDyem at 23:11

Reminds me of the van ride on the Rhine River when we were in Germany.

Me: "Mr Car Driver, how old is the wall we are passing."

Thinking to myself . . good lord, my country is only 200 years old (at that time) and he thinks this wall is "new." LOLOL

That is smething I so enjoyed in Europe . . . seeing things that are TRUELY OLD . . not just antique.

You are now posted in my FAvorites Bar so I can find you now :0}