I have taken Mary-Jane out again today, mainly to give HK a break so he can rest his back, and Mary-Jane seems to like to go out.  This morning I took her into Egremont to change her Valentine's Money from her Auntie Ann-in-America.  We also went into the Age Concern Shop.  I got a knitting trinket for myself (more on this later) and a book for HK.  After moving away from the counter I wasa drawn to walk out of the shop via the glassware shelves as I had been looking at them whilst at the counter.  There hadn't been anything that caught my eye, but I thought, why not.  I slowly walked past the glassware, then past the curtains/blankets.  I sometimes give it a glance just to see if there is any intersting fabric that I could possibly re-use.

Then I came upon this quilt. I looked at the price tag - a grand £4.  I scuttled off to the counter with my new find clutched tightly in my hands.  I wasn't going to let this go.  I have just realised that I should have rotated the quilt 90 degrees before I photographed it.  This way on top of the cooker quite nicely.  It is nearly Christmassy colours, I say nearly as I don't think yellow is.  The border fabric is christmassy as well.  The pattern is called 'The Magic Bowties'.  And how do I know this? 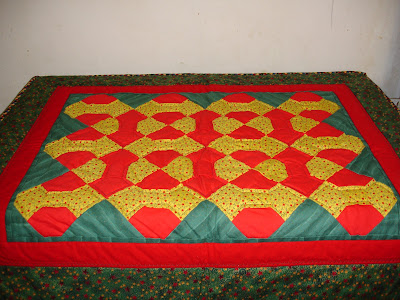 When I got back and was looking at the quilt properly, I turned it over and there was this message square on the back.  The top red sqaure reads 'The Magic Bow-Ties'.  The lower red square reads 'Made by Members if Wordsworth Quilters, Cockermouth, Cumbria, 2002'. 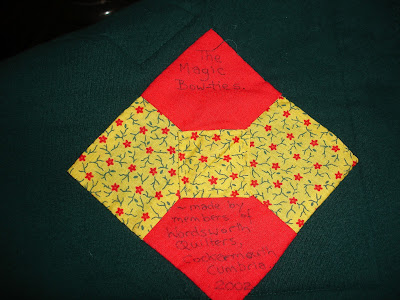 I have googled this Quilting Group and they still exist.  I have an address of where they meet.  I am going to send a letter, stating that I have the quilt and how I came about it.  I would like to know why it was made, whether for a raffle or a gift etc.  I don't know if they would be interested to learn that I now own their quilt.  If I was them, then I would be interested.  I'll send them the two photos here as well.

It certainly is a special find.  I am already inspired to learn to quilt and do patchwork.  It is something I have wanted to do for many, many years.  I have everything apart from the time, money and space!  One day perhaps.  I'll keep you up to speed with The Magic Bow-Ties Quilt and it's re-union with the Wordsworth Quilters.
Posted by CarpeDyem at 22:59

For years I slept under a Bow Tie Quilt that my great Aunt Ora made . . . if I would ever quilt, THAT would be the pattern. I just love it.