I had heard of the campaign to knit a cushion to give to each and every athelete at this years Olympic Games.  I'm not particularly olympic minded.  The more I saw about this though, the more I gavve it thought.  The final straw was when I saw a 'bit' about it in the December/January County News from the WI.  Well why not I thought.  I'm trying to be more active, get involved and get out and about.  I contacted the local co-oridnator, DP, and things are going well.  Luckily DP lives probably less than 10 miles from here.  We have swapped quite a few email and seem to get on.  I was invited to go to her house, sort things further from there and join in with the Knitting Group that was happening that day at her house.  The views from her house are stunning.  I must explore that neck of the woods.  Then again, all around here ranges from beautiful to breath takingly stunning.  Even Sellafield has a strange beauty.  I digress.

The cushions are to be 16" square and to be made of British Wool only.  DP gave me three balls of yarn from her stash, that she had set aside for the cushions.  All I can say is that I am thankful to have the chance to knit with such exquisite yarns.  Two colours don not have ball bands but the third is 'Pure Hebridean Wool - Natural coloured fleece from a Rare Breed Hebridean Flock'.  If I'd not decided to participate in the Cushions, then I wouldn't have had chance to knit with this wonderful yarn or meet someone who calls me a 'Fellow Knitter Nutter'!  Kismet.

I have started on the knitting proper tonight.  I initially decided to do stripes.  Later I decided to do a mitered square.  I cast on 145 stitches on to 4.5mm circulars.  I am k2tog either side of the central stitch on alternate rows.  I am doing four rows in each colour and keeping my fingers crossed that it turns out a 16" square!  If not, jiggery pokery!

Here is a close up of what I have done so far, only 12 rows. 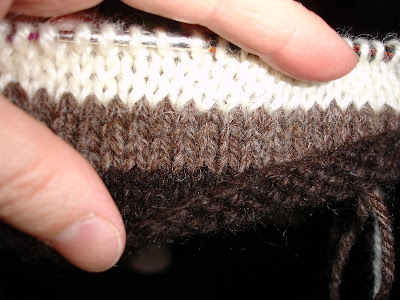 And here is not quite so close up! 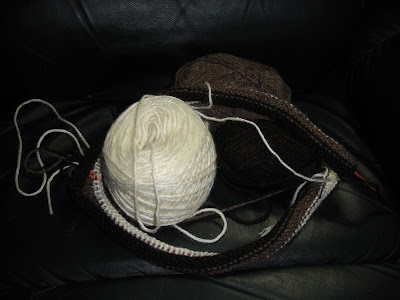 I'm hoping it will turn out rather good and I do the yarn justice!

If you want to know more about the whole cushion thing - have a look at Woolsack  It is full of information - and includes free patterns!  There is one with some cabling that has caught my eye.
Posted by CarpeDyem at 22:12

Now I know what your Olympic cushion is. WHat a wonderful idea . . a cushion for everyone made from the yarn of your country.

Wouldn't it be interesting to know who got it when they are given out?

I'd love to know who will end up with my cushion. I think you can put a tag on it, saying who made it.