One Side Of Olympic Cusion Completed

I have completed one side of my olympic cushion.  It will need blocking to within an inch of its life.  If it is measured from the middle of the side to the opposite side it is 16".  Along the actual sides it s a little less, hence the required blocking.  I still like the colours.  I'm lookimng forward to doing the other half, I know it won't take long either. 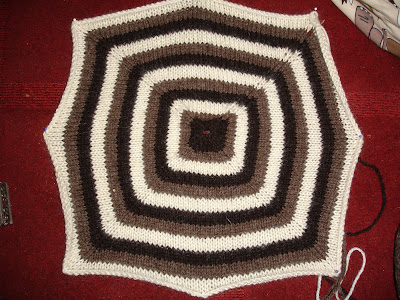 After that I want to finish Sereknitty.  After that, it's a toss up between something for Mary-Jane or the Skew Socks. As long as I don't get distracted by anything else, these things happen!

Mary-Jane has a cold at the moment.  Poor little mite.  She is struggling with herself.  She does her best to be good, then gets really tired and cranky, but just won't let herself have a nap.  She contents herself with sitting on either mine or HK's knee, having big cuddles, sucking her fingers and holding onto Mr Snuggles.  She hasn't lost her appetite and loves taking calpol.  She has been a bit windy, and looks in the direction of her bum at these times, then looks at us and says 'bop'!

MJ spent a good part of the afternoon, walking about the house, visiting Grandma & Grandad in their respective rooms.  After her tea, she was lying on the floor.  I asked her if she wanted to go to bed.  She got up, went over to Daddy HK, put her arms up for a pick up and said 'bed'.  Her bed time routine starts with saying night night to Daddy HK and having cuddles.
Posted by CarpeDyem at 22:53

Don't you wonder what goes theough a child's mind the first time they realize thay have "made wind?"

How cute, her checking her bum out after it.

A girl after my own heart!