Beckermet Sports Day took place today.  It started with a Fancy Dress Parade through the village, from the garage to the school.  There are various stalls where you can byu cakes and drinks etc, plus plants and bric-a-brac etc.  There is races later on in the afternoon for the children and a cross country event, as well as a Moby demonstration, bouncy castles, climbing wall etc.

I'm not quite sure how long the Sports Day has been happening.  The Fancy Dress Parade is for the children.  This years theme was 'Kings and Queens', surprisingly.  Mary-Jane was dressed as The Queen of Hearts.  Mum made her cape late last night.  She has strawberry jam tarts in her pot.  I was so proud of Mary-Jane.  We were the last to arrive for the Parade, so walked at the back with the younger children.  There was only perhaps ten or twelve children dressed up.  At the front of the parade was a small van playing rousing classical music.  It was quite exciting.  A few people came out of the houses to watch, as well as everyone else who was parading with the children.
Mary-Jane at the start of the Parade 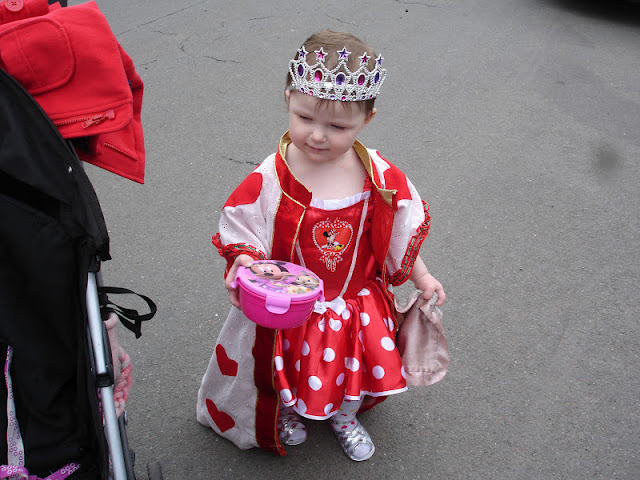 Mary-Jane paraded really well.  She walked half way through the village.  By this point we were well behind everyone else.  It was gently advised that I put her in her buggy and push her the rest of the way as the judging would happen as soon as the parade arrived on the field.  I put Mary-Jane in her buggy and we caught up on the last stretch of the parade. 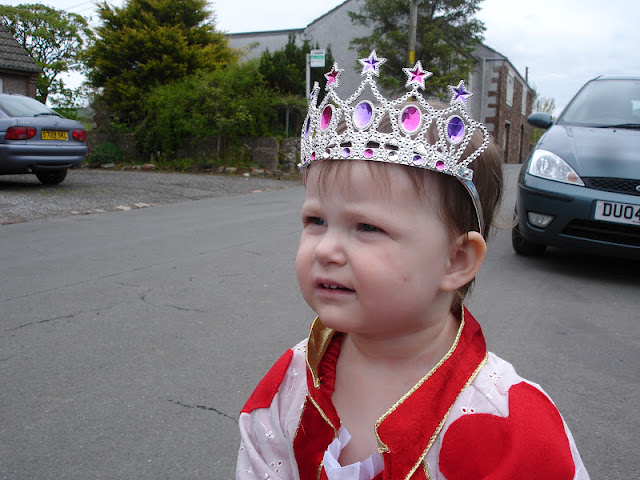 Once at the school, I got Mary-Jane out and got her in place for the judging.  She was in the Pre-school group.  Two of the other girls were dressed at the queen of hearts also. 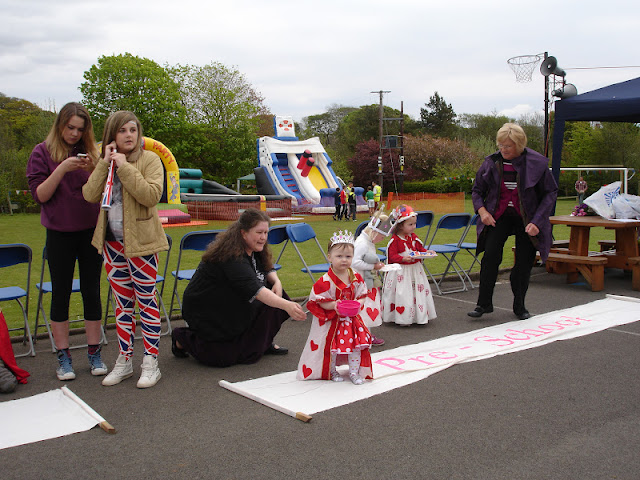 My beautiful little girl was awarded First Place.  I was so proud of her.  I did shed a tear. She had a medal and a certificate for taking part. 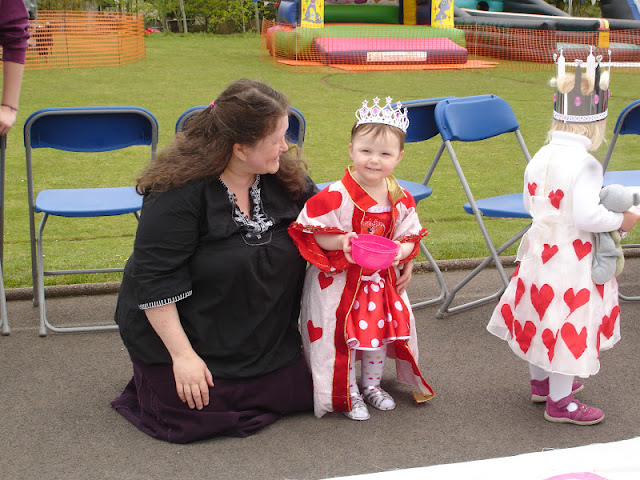 Here she is with her medal, eating her jam tarts and watching the activity on the playing field. 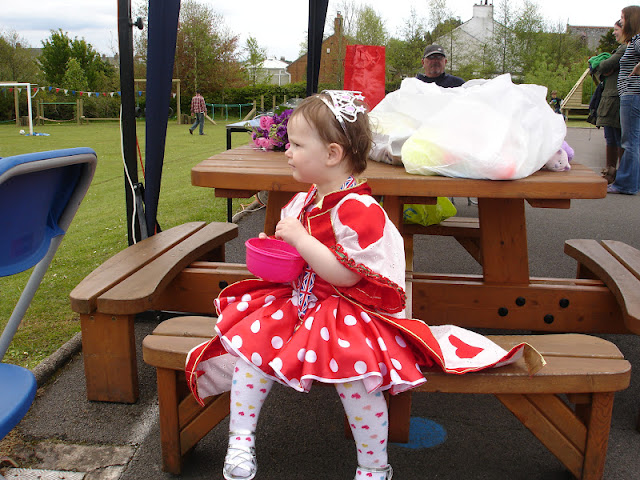 Mary-Jane thoroughly enjoyed herself.  We had a quick look in the school at the stalls, then we went outside.  It was a warm day in the end, despite the weather people saying it would rain.  Then again to say that it might rain is a safe bet around here.  MJ called the school rooms the kitchen.  At first she was happy to sit in the wooden playhouse and look out.  When the Moby demo started (Moby is a dance excercise, which is supposed to be very popular at the moment), MJ was very interested.  She walked to where the demo was and watched.  She didn't like standing near the speakers so moved her self closer to the dancers and started doing a dance and giggling. At one point she ran right through the middle of the demonstation then stopped at the other side to have a dance there.  After that she was running around the field, wanting to sit on some of the play equipment.  She found a football and carried that around a bit and gave it a little kick about.

By 3pm, she was geting tired.  She was so excited and taken with everything around her that she didn't want a drink.  With protest, I picked her up, got her in her buggy and bought her back to the house.  She was one tired and happy little girl. And I was so so proud of her
Posted by CarpeDyem at 23:36

also, where can I get a pair of Union Jack leggings??? Those are awesome!

I'll keep a look out for Union Jack leggins for you if your really want? Let me know! I did actually see someone wearing stars and stripes leggins today, one leg stars and the other stripes.....