Mary-Jane awoke early this morning, she was crying her sleepy cry and didn't settle.  I went in to her and bought her through to our room.  Several stories later I attempted to put her back on her bed.  No chance.  We came downstairs.  It was ten to six by then.  She has kept going all day with out a nap.  She was unsteady on her feet by mid afternoon - a sure sign of her being tired.  I took her to bed at her usual time and there hasn't been a peek out of her since.  She was shattered. 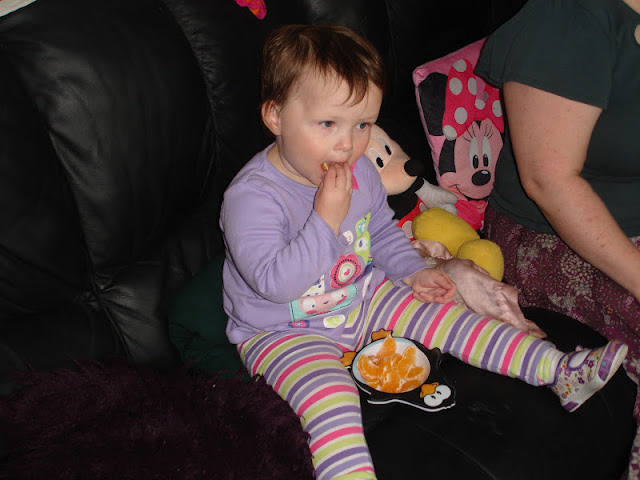 Wednesday is my new Baking Day, for the Country Market in Whitehaven.  I am slowly getting into a routine with my baking.  I started at 8am.  I have made my usual 45 scones and 12 mince pies, plus 22 Viennese Fingers and 16 Viennese Thins.  I don't think it sounds much till I think a little more of the actual figures and time involved.  Plus I had to take HK to sign on and do the recyc.  With such an early start and if I didn't have to take HK, I might have been able to do something else as well.  I have not sandwiched the Viennese things, just dipped the ends in plain chocolate.  They are quite labour intensive.

I ought to really mention here as well, that I have had a much better degree of success with them than last week, where I lost 30 out of 36.  I have 48 finished items and I think I lost about 10.  Most of those were the thins, and the broke when I was dipping them in chocolate.  So nowhere near the wastage as last week.  The answer is greaseproof paper! I have used a different recipe.  This new recipe includes cornflour and vanilla extract.  They melt on your tongue 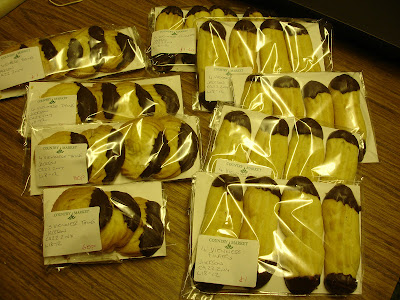 The strip light in the kitchen has made them look yellowy.  I'll see how they sell, as to whether I make them for next week.  I could really do with a bigger nozzle for them.  For the fingers I didn't use a nozzle at all and scored them with a fork.  The Thins are thin.  Too thin for my liking, but that's me.  I shall have to see what I can do extra for next week.  It must be something that doesn't take long to make and doesn't need any post-bake aftercare - decoration to you and me!  And it must be preferably something that is not already being made.  I will put my thinking cap on, not tonight though.

I was day dreaming that I had my own bakery and hand dyed yarn business.  I thought it was a feasable day dream.  I could sell the yarn initially on ebay, the later on Etsy, perhaps, like I used to.  Now what would I call my business?  That was something that didn't even cross my mind!  Let me know if you have any ideas?!
Posted by CarpeDyem at 22:46