I have been busy working on my Sugarcraft Fairy.  I was experimental with the base, with a degree of success.  I have been asking a few people at the class how they did theirs, and I wasn't too far off the mark.  I did put two more layers of petticoat on her, but on the third one I managed to flatten the edges more and so it is bigger.  A plain mistake.  I would have liked the red skirt to be more fluted but never mind!  I wanted to do a longish coat to hide the join of the skirt and am quite happy with that.  I think putting the collar on might be a bit tricky - hopefully I will be inspired to do this.  Since leaving the class, I have already had 'improvement ideas' on what I was trying in the class.  The buttons were a little bit of inspiration and was chuffed with myself for thinking of it! 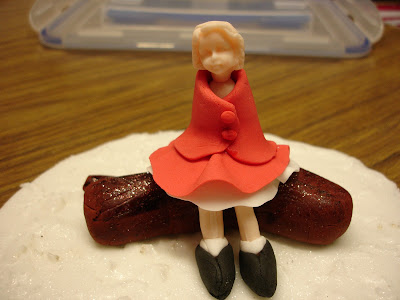 Dress MakingPattern Cutting Shapes and Theories were starting to bubble up to the front of my brain.  It has been over 20 years since I did my BTEC in Fashion.  It's nice to know that what I learned is still in the nether regions of my brain and is able to surface and be used.

Next to do is her arms.  I started making shapes for the sleeves, but my mojo and time were running short, so I began packing my stuff up.  I also want to make a tree.  I asked one of the ladies how she did hers, and she gave me quite detailed instructions.  I might ask HK for help as it needs a small wire frame.  I'm sure I could do it myself, but he is, as he reminded me, is a very accomplished model maker, with a degree in Fine Arts! 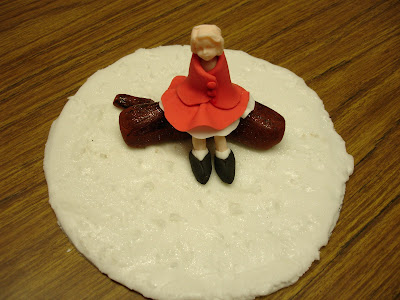 I also need to make her a bonnet and try to paint her face a little.  I will also try again to make a lamp post.  I have better ideas how to do it, now I have had a think and a cogitate.  I have also made a bundle of twigs and placed some twigs to look like and unlit fire.  I shall put them on when the fairy is dressed.  I'm enjoying this project so far.  I had the impression initially that it could be done within a few weeks.  Perhaps if you know what you are doing and have done something similar before.  I will study my new sugarcraft book from cover to cover when it arrives.  I have also been recommended the original book that I looked at, so I may take another look at that.

I now have a full list of what I need for the next project.  At least I have a little time to get things together.   I must figure 'christmas' and 'life' into that little time that I have !!

Mary-Jane is much on the mend.  Her cheek is about as much flared up as yesterday, however it is responding well to the creams that I'm putting on her.  She lies so still and relaxed when I massage her creams in.  The look in her eyes absolutely melts my heart.
Posted by CarpeDyem at 22:42