I have made two more vintage hand towels. I have never known a pattern that I have made so many times. I'm not complaining though. I just hope I don't go off it too soon! The one on the left I started with the intention that it be a halloweeny coloured one, but now it's done, perhaps it is more autumnal. The other was just to be with it, in a set. I'm not sure whether to make another one or make a couple of cloths first.
The second one I did on a coach trip to Glasgow, to the Hobbycrafts and Crafts for Christmas Exhibition at the SECC. This was the first time I have left Cumbria since we came here in January. 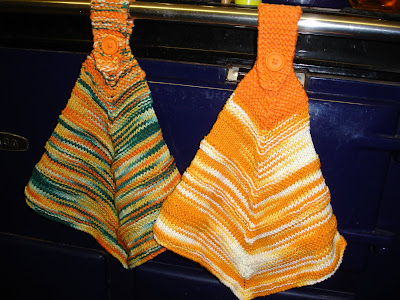 The coach took a gruelling four hours each way. Not surprising I got the towel done - and plenty of naps on the way back! The exhibition was interesting. I've not been to a crafting one before. There seemed to be a heavy emphasis on papercrafts and card making. Still, I came away with lots of ideas of things that it would be possible to make. I got five balls of Lana Grossa Basics Tiramisu Print in orange and black. As soon as I saw it, it screamed to me 'Tigger - Mary-Jane!' Five balls later....... I cast on this evening. That is once I found a pattern, which didn't take too long, thanks to Ravelry. I did originally think about doing a hoodie, but then fell upon a hooded poncho by Drops Studio. I have nearly finished the hood. I did have a dilemma as to whether or not I would have enough yarn, I will be sailing close to the wind, and keeping fingers and toes crossed. I haven't yet taken a photo.
I really need to get a wriggle on with my sugarcraft, I'm getting a bit behind with it. I haven't done any since the last class, and the next one is Tuesday night. Tomorrow evening will be spent watching a scary film and eating nibbles with HK. I doubt it very much that I will be able to do any during the day as Mary-Jane will be wanting her Momma and she comes first!
Posted by CarpeDyem at 20:58