Water That Runs In The Wrong Place

We've sprung a leak in the gennel (the entry) between us and next door. It's water this time. So last night HobbitKeeper and Mr & Mrs Neighbour started digging. I looked on and kept the workers in tea.

This is the offending pipe, now temporarily lagged with an old tea towel. The water was turned off at the mains, but that doesn't seem to have made too much difference to the water flow, such is the quality of Severn Trents taps. 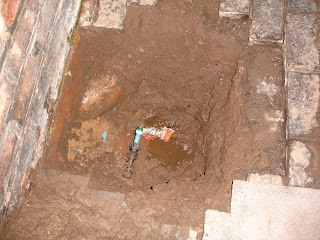 HobbitKeeper and Mr N went out yesterday evening to get a new joint, or elbow in plumbers speak. But to no avail. The problem is that the pipe going into the elbow is an old metal one (just can't remember what sort of metal...) and the pipe going out is a relatively new (about 15 years old) blue plastic one. On top of that metric and imperialistic stuff, I managed to glean that one part of elbow is female - to the old pipe, and the other end is male. 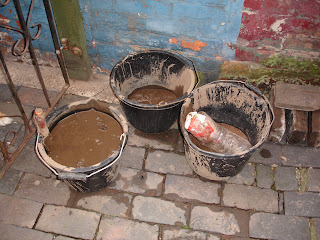 Here are some interesting buckets of sludge that came out of the aforementioned hole.
It's a bit tricky without running water. Or water that is running in the wrong place. I went to the Big A this morning after dropping HobbitKeeper off at work and got 6 2litre bottles of their best cheapest water - 13 pence a bottle. I've two unopened bottles left. The Chooks had one bottle - I told them they were Very Posh Chooks today as they were having bottled water. Good job they can't read as they would realise that it isn't posh water really, just cheapo water.
Another bottle went down the loo. This doesn't work like flushing. It only dilutes. I am considering going back to the Big A to use their facilities, unless I can hold on till I get to work this afternoon.......
But I have water for tea! Rhinog has a full bowl of water. I can wash the pots after heating the water in the kettle. And The Chooks have had some peas and corn.

This is the hole about a yard and a half away from where I took the first picture. I must mention that Mr & Mrs Neighbour are very well equiped for all sorts of domestic disasters! They have an electric light on a long cord (the wire of which can be seen on the picture). Also the blue thing is a suction thingy which they normally use to suck all the water out of their ponds. Along with a square of carpet to kneel on! 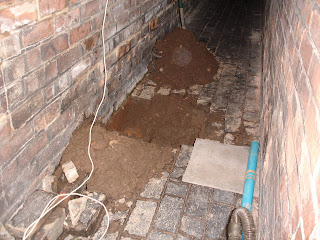 This is Rhinog telling me telling me that something is happening in the gennel. He's a sharp one! 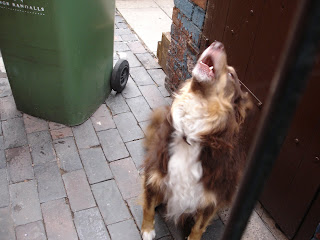