Last night saw the completion of the Boho scarf. I was glad to have finished it and that I had got such a fairly simple think right. As it was a bit late and HK had been in bed for a while, I didn't think it would be a good idea to wake him and ask him to take pictures. He is enthusiastic with my knitting but waking him up like that would have been pushing the boat out some what!
I did an extra 20 pattern repeats in the middle to get a decent length. I think it would look rather lovely in a lighter weight yarn using biggish needles. The limits of my late night (for me) creativity are limited, hence the only thing I could think to drape it round was a hook on the back of the door. 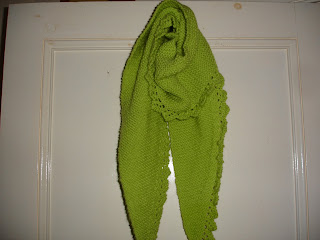 Or me, taking a photo of myself. Yes I do look pooped and yes they are my new glasses. The scarf is enjoyable to knit and is on my list of Things To Knit Again. 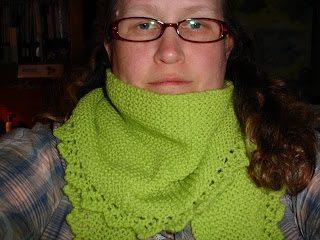 The scarf was dispatched to it's new owner in the post this morning. A surprise gift for a good friend. I thought of her alot whilst I was knitting it, it seemed the right thing to do to give it to her.
Posted by CarpeDyem at 23:27

This is stunning my lovely. Miss you. x