A Home Made Bear

Knitted Toys are fairly new to me, I have room for improvement. But this Bear, it has Bear Magic to me. The stitching together is, well, the biggest area that could've done better, closely followed by the amount of stuffing I used. The poor thing looks like he hasn't had a decent meal for a few days! 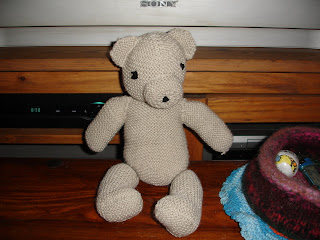 All that being said, he does have a certain charm! The pattern is from Debbie Bliss 'Simply Baby'. I started it just over 2 years ago, for a freinds baby, that hadn't then been born. This baby now has a younger sister. So as part of me trying to complete some of my WIP's/UFO's, Teddy Bear was finished. He nearly was before. All I had to do was sew on his arms, nose and eyes. But I didn't like the way I'd sewn his legs on. So he sat on the shelf till a week ago.
I took one leg off and restitched it on, but it didn't seem to make a drastic difference, so I left the other one. After I realised that as much as I tried the arms were wonky. I did make a bigger effort to get the eyes to match. I wanted sewn eyes rather than button eyes.
Now the knock-kneed, pidgeon toed, wonky shouldered, needs feeding and magically charming Bear, is all ready to be given to Our Little Spud!
Posted by CarpeDyem at 08:19

Aw! I think teddy has real cute appeal, I love him already1