Mary-Jane in her high chair in the kitchen

Mary-Jane had some time in the kitchen today, in her high chair. She appeared to enjoy every minute of it, and stayed in her chair for well over an hour until she got a bit restless and tired.
Mary-Jane was very interested in what was going on around her. She had already had her Farleys and bottle. 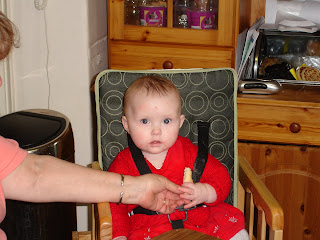 Mary-Jane enjoys sucking on a piece of soft bread with butter on - and getting very independant by holding it herself. However I do have to watch her extremely closely. 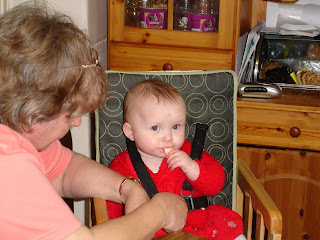 Here she is having loads of fun! MJ loves Mr Bee as well. MJ has had that much fun and excitement today that she didn't want her naps, despite my trying to put her down a couple of times. However come 6pm, she was on her chin straps, so when I did lay her down in her cot she did not protest, just pulled her duvet up and started sucking on her fingers - the next thing she does after that is close her eyes and sleep! 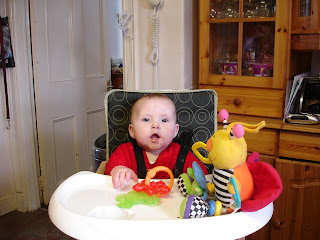 Mary-Jane is quite sociable, she loves company and being in the middle of things. She also loves nothing more than sitting on Momma's knee. And cuddles are the best, especially when you are stood up.......